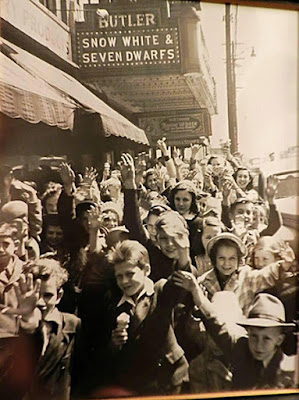 Wow! This movie was released in 1937. This picture must be pre WWII. I remember going to the Butler theater and the Penn as well. The popcorn there was the best ever.

I remember when ARMCO would rent the theater for a movie at Christmas time. We were also given some kind of treat, but I can't remember what it was.

I just noticed the little boy in the front right corner and the girl behind him are both wearing hats plus several of the boys look like they are wearing suits. Seems like people used to dress up to go to the movies.

I remember the Butler Theater well. On Jefferson between the Pittsburgh National Bank and Kirkpatrick's Sporting Goods store, if my memory serves me. I remember when it burned down. PNC than used the site to build their drive thru bank.

I remember seeing "Santa Clause", sometime known as "Santa Clause vs the Devil" there. This movie is famous for being voted the worst movie of all time. It scared the beejeesus out of me.

We went there as a field trip from JR. high to see Romeo and Juliet.

The treats from Armco were mesh stockings filled with candy

C'mon along and jump into my "Wayback" machine. We'll go back to June 1952, when that outstanding BHS Class (now mostly forgotten and
composed mostly of geesers and geeserettes)460+ strong, the largest class up to that time to graduate from Butler High, realized the BHS auditorium was just not going to be large enough to accommodate the throngs of relieved. And so what did their wandering eyes light upon? You guessed it-the Butler Theater. That was where the commencement ceremonies were held. And to insult to injury, few realized that "commencement" meant "beginning". So much for those many who did not take Ms. Doerr's (sp?) Latin classes.

Was good to see that our cherished teacher, Dorothy Doerr, is still remembered. She gave us so much.

She was my favorite teacher.

She was my favorite as well.

do not remember who r wertz is, will have to look at the magnet. i graduated in that 1952 class. fond memories of the butler theater. d denton

I'm not sure if it was the Butler or the Penn theater's, but the whole St.Paul's school went there one sunny day to see the movie Lilly's of the field, back in the early sixties.

i got locked in theater when i was a kid. i fell asleep in the seat. they forgot i was there. my dad and manager woke me up around 2 or 3. in the morning.