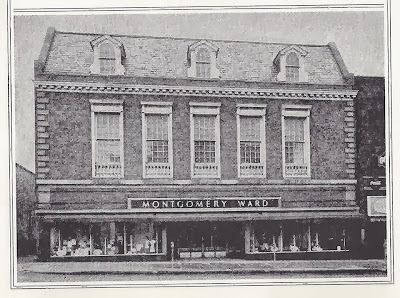 We kids loved Montgomery Ward's because they had some bicycles in the basement that we could feast our eyes on.
Posted by Charles at 2:10:00 PM

My Aunt worked there for many years,transferred to the new store and eventually retired from Wards. I remember the big black fans,this was pre air-conditioning big time. Stifling hot in there in the summer.My Mom didn't shop there a lot,preferred Sears even though they only had a catalog store in Butler. My big attraction was to go look at the rifles and shotguns they sold.

What was this store before it was Montgomery Ward? It was quite a beautiful building.

Yes, I believe it was Jaffe's after that.

Yes, Jaffe's after that and then I think Armstrong Utilities occupied this address until it was converted to offices or something. But that last metamorphosis was after I left Butler in the mid-70's.

The upstairs section of the building looks so inviting. Is there a great magnificent hall up there?