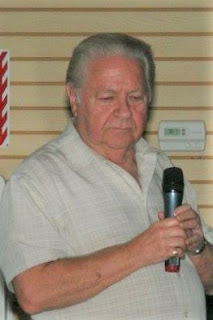 Jack Bowman
played drums in the BHS band then went on to play in the U.S. Air Force Band. Upon returning home he did union jobs with various groups and started his own big band style group which played all over Western PA and Ohio for many years. Jack played drums in several Butler Musical Theater Guild productions. He was also well known as a barber at the Point Barber Shop. He retired from playing recently and donated all the charts from his many band years to the Butler High School Music Program.