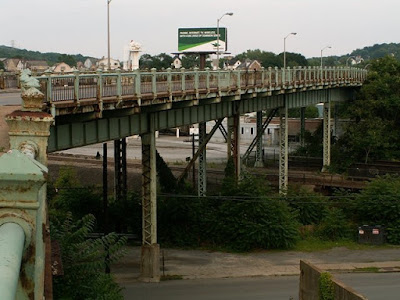 There's a memory..and don't know that I've traversed the replacement. Thanks, Charles.

Hello James...It is as if we had just met on the viaduct. Good to hear from you.

When i was just a tike, ie, still wet behind the eyeballs to coin a phrase, I recall being afraid to walk over that bridge next
to the rail. Afraid of falling I guess and the person I was with
(much older) was also afaid to walk on the inside. Since I was smaller, guess who had to take that position-me.

Back and forth over that bridge on the way to the Majestic movie
theater from ...ah, let's see if I can dredge up the name of the
street on the South side of Butler-ah- South Street-now that wasn't
that difficult was it? In any case, the family moved from South
Street before I could overcome my irrational fear of falling off
the bridge. I was institutionalized-moved to Institute Hill.

There were other institutionalized kids there-one an Uncle of
James-Dick Williams- who couldn't go out on a Saturday morning
to play until he completed washing the steps leading to the cellar.

And if James ever gets back there, be sure to look under the porch
of the Fourth Street home. That is where all those extra war time
Post Gazettes were tossed tightly rolled up, protected for posterity
or 2020 which ever comes first.

Can anyone name the last person to walk across the bridge?

The last person who walked across it fell through to a quick death.