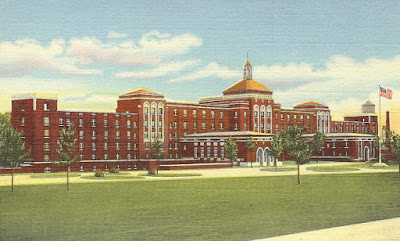 Thanks: Dennis Moffitt
Posted by Charles at 4:20:00 AM

They picked a good site for this building.

Two generations of my family got well at the VA Butler Healthcare, my dad for almost two years as an out-patient immediately following WW II, for wounds he received in combat and me, in the 1980's, three weeks as an in-patient for care which ultimate saved my life. As the years went by, even though my dad had top of the line Blue Cross/Blue Shield health insurance, he always preferred going to "Deshon." A miracle the bean counting bureaucrats haven't found a way to close this wonderful place.

My in-laws met at Deshon in early 1946 while they were both working there. They were married in April 1946.

Is this the hospital that is out there near the old drive-in theater. My mother had a cousin in the VA hospital there at Butler for years after he was wounded during the attack at Pearl Harbor. I don't recall exactly where it was, but thought it was near that theater for some reason.

THE STORY OF DESHON

In 1937 PA Dept. of Health wanted a TB Sanitarium in Western PA.
(the nearest was in Cresson PA). 75 properties were considered:
Over 100 acres of Charles J. Robinson farm was purchased for $300 per acre.

By Jan. 1939 four floors had been completed - but because of huge deficits in the State, Governor Arthur H. James decided not to open it for at least two years.
Early in 1940 the project was completed but no patients were admitted and it remained empty until the outbreak of World War II.

In October 1942 after the attack on Pearl Harbor - the US Army Medical Dept. leased the property and renamed it Deshon General Hospital, after Colonel George Deshon.

Deshon emerged as a specialty center for hearing disabilities and was one of only three hearing centers established by the Army during WWII (one at Chickasaw, OK and one in Santa Barbara, CA).The Deshon General Hospital is given credit by many for giving birth to the new scientific field of audiology.

Between 1943 - 1945 32 buildings were added, as well as a theater, a recreation hall, acoustical clinics, gymnasiums, a swimming pool and a golf course. The property on which the golf course was built was given by the Grand Masonic Lodge of PA and constructions funds for the course were donated by the Western PA Golf Assn.
The land reverted back to the Grand Lodge of PA in the late 1960’s, per the agreement, when it was not needed for the recreation of patients and personnel.

On April 26, 1946 the Army closed the facility and four days later the VA officially asked for the facility and activated it on July 1, 1946, in preparation for a large influx of WW II veterans returning home.

In 1948 there were 860 patients hospitalized at Deshon, many suffering from TB and the VA announced its plans to convert to a 100% TB facility, due to surgical and medical beds being available at the University Drive facility and neuropsychiatric beds at the Leech Farm Road site.

In 1954 excess land was offered for sale to the school district if used for school purposes within 18 months.

In 1959 Butler Township bought the tract of land behind the Deshon VA hospital for a recreational park - price was a bit over $9,000.


1964 the VA became a total general medical and surgical facility.
Nursing home care facilities were added. (currently we have 104 NH beds).
Surgical services ended in 1969 because of duplication with Pgh - 35 miles away. Patients are still transferred to University Drive VA for surgery.

The hospital has been in an almost constant state of remodeling and construction to meet new patient care needs ad well as more stringent fire and safety codes.

1973 Congress passed the Ambulatory Care Bill which permitted the VA to treat more veterans and to treat them on an outpatient basis.