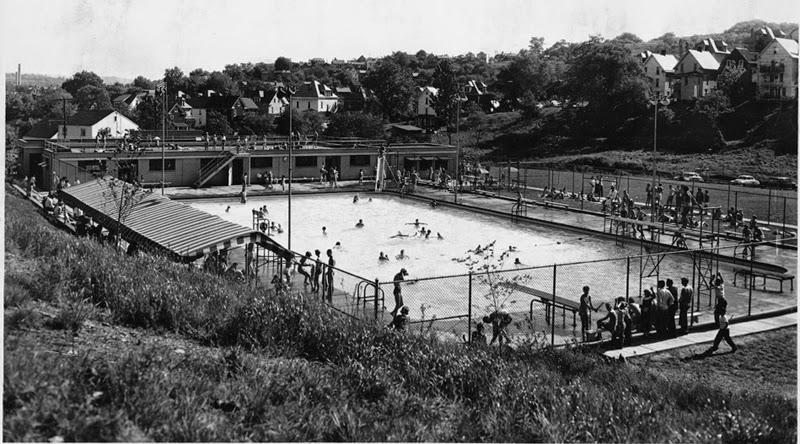 Photo by "Hopie's"
Click to enlarge.
Notice the high diving board and 2 low diving boards.  Sunbathing on roof top.  There used to be a pond in the park close to here where we would ice skate.  The creek was called Sullivan Run.

I spent quite a few summers there in my youth and early teens. I'd stay in the water hours at a time and come out looking like a prune. As I grew older it was mostly looking at girls. I started going in 1957,at that time there was no more sunbathing on the roof. Swimming lessons in the early morning,Brrrrr!!! The area on the right of the pool had the fence moved away from the pool to create a sun bathing area. The snack bar had the best opocorn,used to look forward to getting some after a swim,also liked frozen Zero bars. Memories.

Oh I remember the Butler Pool. However, we like the new Alameda Pool a whole lot better when it opened.

Does anyone remember Silver Sides in Chicora. We really liked that place. It was large and had a neat water wheel type of thing in the middle.

I had a gay old time there as a kid. Just hangin' with my boys. I miss those days.

My grandparents lived on Mercer Street, not far from the pool, and I remember spending a lot of time there in the summers. I also remember that the pool was closed one August in the '50's because of a polio epidemic

Didn't get to go as much as I wanted to, at least in the water, but was by it a lot as it was pretty close to my Grandmother's house on East Brady Street.

I was in every water show in fancy diving. My dad taught the divers.

Does anyone remember a one armed man who was always at the pool?? We called him Magoo for some reason.