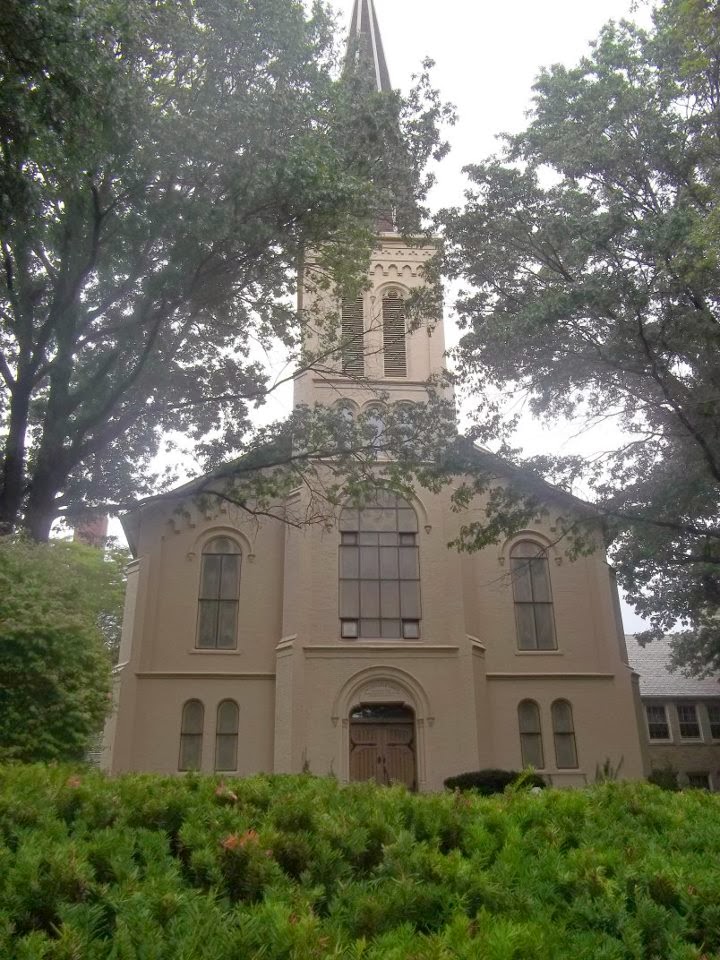 1813-2013
The oldest church building in Butler is also the city’s oldest congregation. The congregation began formally meeting at the Butler County Courthouse on
April 7, 1813, with its current home being built in 1862.
Photo: Georgia Sawhook
Posted by Charles at 5:16:00 AM

I read that this church was a stop in the Underground Railroad during the Civil War.

That is correct about the underground railroad. I attended this church for many years as a child in the 60's-70's. During Youth Group meetings they would show us where they hid everyone. I remember the first time when I was in grade school, I was expecting to see an underground railroad complete with train tracks. I was disappointed when it was just an underground cubby hole.

The thing that was a pity about this was that when we were kids (50's & 60's), we were taught that Catholics go to heaven and everyone else goes to hell, thus we never set foot inside any of these magnificent church buildings in our own hometown.

My church when I was growing up. Still my sister's church. When I was there the Minister was Rev. Carl Bogard. A wonderful man.

I'm here on a little trip to explore my great-grandfather's life. His name was Rev Charles Henry McClellan and he was born in Wheeling, West Virginia, and went to school at the College of New Jersey, which turned into Princeton, and after that went on to theological school. He was the second pastor at the First Presbyterian Church in 1872 to 1878. I'm still learning about what happened when! He was married to my great-grandmother, Maria Malleville Wheelock Smith McClellan in around 1875, in New York City (lots of family came from all over the place!) They had one child, my grandmother, Mary Malleville McClellan Howard. I have numerous letters from those days, which that grandmother saved. They doted on the dear little girl, who was so pretty and smart and special! She was called "Mallie." Neither of them used the name "Mary/Maria," which had historical significance. But I guess they preferred to be called "Malleville" Malllie, for short. My great-grandmother and great-grandfather doted on each other, too, from what I can tell from their letters! It seems they were in different places much of the time, and would stay feeling close through (hard-to-read) letters. For example, he would visit his family in Wheeling, and she would stay home, or visit her family.

He seems to have had the nickname "Mac," and I've read nothing negative about him as a pastor, only that he was beloved by his congregations. He went on from Butler to have a post in the First Presbyterian Church in Lakewood, New Jersey, and he was the second pastor there, as well, from 1889-1900. I'm just enjoying writing about my great-grandfather! My parents never said ONE WORD about him or my great-grandmother. I guess they were pretty busy people, but we we used to have my grandmother (little Mallie!) out for Sunday dinner when I was growing up, (near Boston) and she could have talked about them to us. So now I'm having the pleasure of this genealogical research, living with one "foot" in the past and one "foot" in the Now. This is a lovely church and it feel so good that it is still going strong!

But I just read that comment that they are moving meeting place to a large building in the suburbs. Is it really too crowded? The old beautiful buildings themselves contain the spiritual energies of all those past services, weddings, baptisms, plus the architecture, designed with the love for and glorification of God, create a holy space that you could just walk into and sit, and never have to hear a word or a hymn, and you would feel spiritually blessed. I hope people will keep that in mind. Well, that was written a while ago, so I don't know what happened. It's Nov 2015 now!

I'm glad a had a little place to write about my great-grandfather — my new acquaintance, he and my great-grandmother! Our family tree is on Ancestry.com —Judith Shea's tree. And I recommend everyone work on their own Family Tree. It's an amazing experience! I'm really not sure why it FEELS so right to learn about my ancestors, but it does!