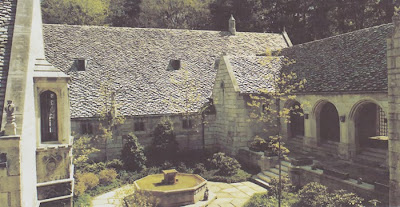 Looks like a monastery I saw once in Europe. Probably the architect had that in mind.

I remember it was early one morning and I had snuck up on the mansion. I was about 5 or 6. I walked under the walkway and could hear the water from the fountain. I overcame dread and walked in and over to the fountain,there was a dead cicada floating in it. I looked around an marveled then dashed out. It was better than cowboys and indians.

You can go to aerial view of this property and see how big it really is. You can view the location of the tennis court, olympic size pool, and all the sections of the home. Some of it is not original, and was added by one of the owners to look as though it was. It was alot smaller when the Phillips owned it.

if you lived near it you could see it !

I was in this building once, when the Phillips Granddaughter, Ruthie Ehrman, was a classmate. We had a little "club" where we went to one anothers' homes once a month. I remember thinking I was in a castle - which I guess I was.

the book "the architecture of benno janssen" has a good spread showing the property.

interestingly enough it is now owned by one of the Koch brothers...although not either of the 2 you typically hear about for their political involvement.