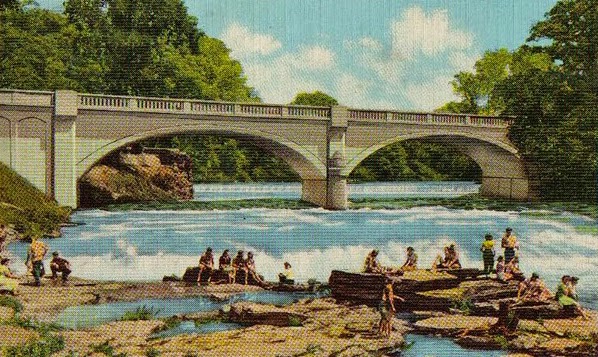 We preferred the Rocks to the swimming pool.
Posted by Charles at 3:00:00 AM

Oh my, but they were slippery! But still I always went out there and sunbathed on the warm rocks.

On the other side of the bridge was a nice swimming hole with a swing out rope.

My dad told me about some who had a concussion of the brain after falling on those slippery rocks.

Not my mom...she was petrified at the mere thought of us wandering out into Slippery Rock Creek. We used the pool....

I thought that Slippery Rock Creek was quite beautiful even though it got polluted somewhat by strip mines. I have been in Texas for many years (30 some years) so I have to rely on my memory. Is the old mill still on it?

I hit my nuts on the rocks one time when I slipped.

One of the men who owned the swimming hole above the dam was my Dad, Edward A. Gallagher and he passed away on February 19, 2013 at the age of 87. He and one of his cousins bought that land in 1955 when I was about seven. We spent many summers at that place above the bridge and also sliding the rock down under and below the bridge. Used to be picnic tables on the upper side for families to come in on the week-end and picnic and swim. Many good memories. Thank you Daddy. Helen Gallagher Daubenspeck

THE ROCKS WERE GREAT.. DOES ANYONE REMEMBER THE DANCE'S HELD RIGHT BELOW THE BRIDGE.?. AND THE DJ WAS GUY TRAVIALO(OUR PA STATE REP) THIS WAS LONG AGO BUT WE HAD FUN AT ROCK FALL'S PARK. AND DON'T FORGET THE FORTUNE TELLER IN THE PARK.