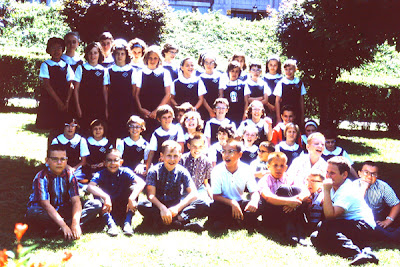 
We could be a happy class back in 1963 and today we are all grown up and have children of our own. We want you to know we are mourning for yours. Our hearts share your sadness.
St. Paul School,  Fifth Grade. [See comment 8 for list of pupils.]

A President, his brother and a civil rights leader were assassinated back then. Cities burned in race riots; kids were dying in the jungles of Vietnam.

But nobody shot up schools, no one opened fire in movie theaters. What's happened to us? God comfort the parents of Newtown...and the rest of us.

What a fine tribute, Charles.

I don't remember posing for this photo...but there I am, in the back row, second from the left! I count 41 students...amazing by today's standards. Thanks for posting this.
JoAnne :-)

What a nice tribute, and what a nice Christmas gift to those of us in the picture. I am the little boy in the center with the sun in my face (4th from the left, a bit behind the other boys).
Thank you, Charles.

By the looks of it the girls sure do out number the boys. Wish I knew everyones name. I love to look at the pictures on this site and read the stories. I was in St. Peter school 5th grade in 1963.

I have a child in the first grade and have been fearful for her ever since this thing happend. I know I am silly but I can't get it out of my head.

I think some of the boys are missing,Mama Olexa, Jon Greenert, Gary Rhodeburger, and myself Jim Bellis to mention a few. I might be in some kind of detention but not Jonny Greenert. Wonder where we were?

I was a student of the of the first Butler Catholic class to graduate back in 1970. Does anyone have pictures of that class to post? My parents put all five of us through St. Paul's me being the youngest.