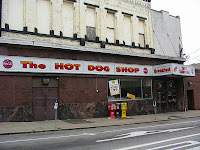 The Hot Dog Shop building, that icon of downtown Butler from 1912 to 2004, is to be knocked down on Wednesday.
The demolition is set to start on Aug. 29, 2012 at 8 a.m., and will include the Reiber Building next door.
The buildings, which have a 101-107 S. Main St. address, face Jefferson Street.
Ken Reilly Demolition, Mars, will do the work.
The demolition will make space for the craft beer brewers known as Butler Brew Works, which will be housed in the former Eckerd Drugs red brick building that faces Main Street. Eventually, the entrepreneurs plan to build a patio on the Hot Dog Shop site.
“That is our intention, and maybe putting in a bocci ball or cornhole court,” said Greg Deal, a Brew Works partner. “We’re getting there slowly but surely.”
Cedar Street, an alley that runs parallel to Main Street behind the Reiber Building, will be closed intermittently during the demolition, said John Evans, Butler zoning officer. Cedar Street will be used as a staging area, he said.
After the demolition is completed, work on the Main Street building will begin, including roof, plumbing, heating and air conditioning improvements, Deal said.
Although an end-of-year opening was planned, Deal said that is “optimistic.” It’s more likely the tap room will be open by spring 2013, he said.
“The earlier we can get open the better,” Deal said.
The group recently bought a 10-barrel brewing system that can produce more than 1,200 barrels of beer annually, based on a two-week production cycle.
The Brew Works then must be 90 days away from opening to apply for a liquor license, Deal said.
“Basically, you have to have everything set in stone,” he said.
The Brew Works partners are Deal and Nick Fazzoni, both of Butler, Travis Tuttle of Bridgeville and Paul Hytla of Pittsburgh.
They bought the quarter-acre parcel in January and auctioned off memorabilia from the Hot Dog Shop in the last two weeks of May to help pay for the demolition. They sold Hot Dog Shop coffee tokens, menus and signs.
from the Butler Eagle

Demolition of perfectly usable buildings in the name of 'redevelopement' is a poor way to go about urban renewal. Iconic buildings are just that in a community, part of the culture and history that should not be bulldozed and dumped in some anonymous landfill. Too bad.

I find the term ''cornhole'' offensive in describing this game, back in my day the word ''cornhole'' had a different meaniing and it isn't pretty

Ah! You revive a town by tearing down one of its oldest and potentially beautiful buildings for a corn-hole court. The owner who demolished it will never get my business. May I say that "corn-hole" could not described the owners more perfectly!!

Where was our wonderful Mayor Stock? Showing no leadership as usual!!!

You could never recreate the Hot Dog as we Old-timers knew it.

"tearing down one of its oldest and potentially beautiful buildings"

Are you serious?
Those buildings are about to either fall down or burn down.
(Woolworth bdg comes to mind)

Can anyone under 50 remember any business usage of the upper floors or were they slum apartments?
(I don't know)

Face it, either you want to look at boarded up old buildings that are cost prohibitve to upgrade to code.
Or you can have someone invest private money downtown (though not my cup of tea)and draw some people and cash there.
It may be a slow start to some needed revitalization.
I too like the old architecture and hopefully they can save some of the old decorative pieces,but you have to be realistic,there isn't a big line to restore these old buildings

Did you know the owner had two buyers for the Reiber building who wanted to restore it!!! But the "Cornhole" current owners instead tore it down for a parking lot.

Get some awareness about successful urban renewal and quite being such a Butler "yinzer" and the attitude "its old, let's tear it down." Successful downtowns restore to revitalize.

Preservation as an urban renewal concept takes public and private leadership and (semi) innovative thinking. It can be done when one or both of those attributes are present; clearly in Butler's case these days, neither are in charge. Demolition is short-sighted and forever; there are options when a community has even a scintilla of desire to preserve it's architectural heritage. But if that's not the case, that's not the case. A pity..

I would love to see all potential HUD buildings torn down. I am a downtown business person and I know that HUD and the welfare bums that live in HUD apartments are KILLING our downtown!

Butler accepting Federal HUD money destroyed any positive vision downtown Butler ever had. Typical thought process of today's American Politician.....only looking at the present and never long term. Come to Pittsburgh and view the "Liberal Utopian Society," and see it for the myth that it is. Those who don't work for their possessions will never respect those possessions...let alone respect themselves for that matter.

But on another note I applaud these young men for taking a risk and following their dream. I genuinely hope the business becomes as successful as North Country Brewing has become. And look at it this way, this idea will at least provide some new jobs.

I will always miss The Hot Dog Shop, but obviously 2004 was the end of an era that shall unfortunately not return.

My regret is that these entrepreneurs weren't able to partner with the city and preserve the existing real estate. I'd love to know if renovation/preservation/remodeling ever factored into the business plan. That would've been a win-win; the architectural history preserved and the free enterprise system and correspondent jobs blossoming. But I doubt that kind of vision was ever explored.

My guess would be that asbestos issues caused the need for tearing down the building. Asbestos abatement is extremely costly. Add that in with the cost of remodeling, and you would have way too much money tied up in making this building usable.

The game of "cornhole" is known as sewer hole or washer toss in other parts of the country. Lets hope this venture turns out for the best.

The remodeling done previously, as shownin the photo, does nothing to make me miss the place. All the character of the entrance circa 1960 was destroyed.

As someone already said, you can't bring back the place as it was in the "good old days." Well, minus the hundreds of pieces of chewing gum stuck under every table!

these buildings are turds that cannot be polished!!!!

Gee, wished I had known about the auction of items from inside the shop. Does anyone have anything they might want to resell? (andy_shaffer@hotmail.com)

Just what Butler needs... another place to get people intoxicated then put in jail for public drunkeness..... Back in my days "cornhole" was a "bean bay toss" Why not try and get some place that everyone of all ages can enjoy. We need more places to shop, remember Christmas shopping during a blizzard. What fun those days were

The building was a dump but the Hot Dog Shop was awesome - I went there and got 2 Chili & Cheese Dogs every time I went to Butler. I'll be looking forward to trying out the brewpub.

Some of these comments are a joke! You know enough to say they had two offers to buy the Rieber building, but did those people tell you what they offered?? I talked to one of the guys at a recent brewfest and asked him why they didn't sell it off and the answer is $10k! Over a third of their property for $10k! $10k doesn't even pay their taxes for a year and they wouldn't have saved much on demolition because it's a little difficult to tear a building out from in between two others. I also can tell you that the city forced their hand on demolition. They were hoping to get a better offer on the building, but were slapped with a huge packet of code violations and given 30 days to correct them. They were bogus violations, all left by previous owners, and the only true way to fix them was to tear the buildings down. Blame the city for your loss of the landmarks if you want to point fingers. I give them a ton of credit for doing what they're doing. The hot dog shop was literally falling down and the Rieber building wasn't much better. Restoration would have been hundreds of thousands and I'm guessing nobody here opened their wallets to "save the landmarks". Let's also not take the corn hole court so literally. They want to put a nice beer garden in and offer entertainment like live music, maybe a bocce court, to keep it fun. Craft beer doesn't lead to DUI's, cheap beer does. And where do you want to go shop??? There are stores down there now closing because you don't shop there enough! Old ideas by old people that clearly don't see the need to bring in something new. Count your blessings some young blood wants to revive the city. I know I'll be drinking there frequently just to show them that unlike most of the comments here, we want them here and need them here. Wake up Butler! Drive these guys away and we'll be sorry!

I live in Butler, not "old" but where is there to shop. Ok we have Dollar General and Rite Aid. I don't need motorcycles , so I don't shop there. I could use some furniture but where do I get that downtown, I could use new appliances , where do I get that downtown. There are not more dress shops like McCarrens Troutmans,Pennys and many other places. Where should I go. Now when anyone comes up New Castle they are forced to make a right hand turn Why?

Downtown Butler is dead; it will never be resurrected. Those of us who are old enough to remember the beautiful downtown of yesteryear will always have those wonderful memories. Downtown Butler now has nothing to offer. When there were good stores to shop in, there were also restaurants. Remember when Eat-n-Park and Pappans were downtown?

I came home from the Jr. High in the early '60s and told my dad that I had gone to the Hot Dog Shop that day after school and bought two hots for $.35. He said, " that's awful, when I was a kid they were $.05 each". Times change and the Hot Dog Shop are long gone.
Ed Kellerman