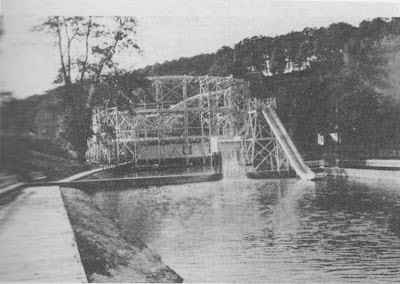 Does anyone have a date for this picture. Very interesting. I did not know Butler had a roller coaster in the past.

I didn't know this

Don't remember a roller coaster in the Butler area. The three coasters I remember was the one at Kennywood, the now defunct Westview and Conneaut Lake. Must have been back in the 30's when the interurban was running.

According to the book, Butler County, The Second Hundred Years (page 125), Alameda Park was opened on July 4, 1901 and closed in 1949. The park included trails, a lake, a Ferris wheel, roller coaster, dodge-em cars, merry-go-round, swimming pool, a roller skating rink, restaurant, tennis courts, picnic shelters, summer theater, and a dancing pavilion. It was open from Decoration Day (Memorial Day) until Labor Day. My parents talked about taking the trolley car to get to the park.

Our fav poster, Anonamouse, said,"My parents talked about taking the trolley car to get to the park.''

I do seem to have clearer memories of the trolley headed south on 2nd Street and turning left at the next steet (Eau Clair?) where enterprising Tom Sawyers would pull the hickey jig from the overhead electric line to bring the behemoth to a stop. I never engaged in this sort of activity of course but a number of my unwashed friends did. I have hazy memories of disapproval...I think.

btw....as an additional thought, I recall there was a 1940 Oldsmobile always parked next to the-what was the name-Kozy Korner?-on 2nd Street and what's-his-name Street.

This car had an automatic transmission which my friend, Dick Williams, had to explain to me. I just could not get it to register that a car didn't need a gear shift to run.

I don't believe in computers either. Maybe I'll have to get in touch with Dick and have him explain them to me and, while he's at it, sliced bread and all the things that are better than.

If the Dick Williams you're referring used to live on 4th Street, Institute Hill and is the same Dick Williams who is my uncle, in his 70's now, living outside of L.A., he's just now getting the hang of email on a computer. He was a Chandler's Potato Bread guy growing up,so I don't know if he can help vis-a-vis sliced bread, although as an adult, he did do engineering work on the Saturn V moon rocket at General Dynamics. Just sayin....

The very same!! I haven't heard from Dick in years. He left for college while I was still in High School. I had a paper route during WW Eye Eye and any extras I had would be thrown under the back porch tightly wrapped. They likely would still be there...a treasure trove indeed.

The summer before I left, I got a job with a roofing company and the first week on the job was tearing off the slate roof of Dick's home on 4th. I almost died...those Butler roofs were steep and slippery. Say "hello" to Dick and tell him his other good buddy, Bob Bush, lives right around the corner here in the Valley of the Hot.

This is a great picture. I read so many stories about Alameda Park and is nice to see what it was like.

Does anyone remember when Carly Simon debuted her hit single "Nobody Does It Better" at the Carosel? That was a great night.

Also, the Beatles preformed there dozens of times. Remember douchebag?

I went here last summer with my family - the place is really in need of repairs.

I always have a gay time when I go there!

We always were so gay and happy when we went there.

I went to Mr. May's talk last summer and it was excellent. He is fantastic storyteller and the pictures and video clips he showed had the audience of 300 plus mesmerized.

I saw in tonighs Eagle that he is doing at the Carousel Shelter again this year at 7:00 p.m.

My grandparents, Jenny and James Raimondi, lived on the road out to the park. They had a pet monkey that would ride the trolley car.

I could find out for you. I know this is a really old post. But my great grandfather was one of the main builders of this coaster.