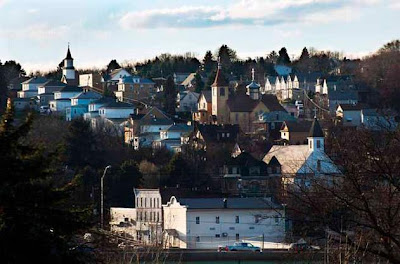 Lyndora in the sunlight.
Photo: Scott Goldsmith
Posted by Charles at 10:28:00 AM

Email ThisBlogThis!Share to TwitterShare to FacebookShare to Pinterest
Labels: Lyndora, View of Butler

What a photographer! A great shot.

In an article about small towns of America,Butler was described as an old-time rural hub as down-to-earth as its most famous product—the Jeep.

The article went on to say "Mines and factories come to mind when people think about western Pennsylvania, but forests
and farms stretch across the state, punctuated by small towns like the seat of Butler County
north of Pittsburgh in the Allegheny River watershed. Butler (pop. 13,800) is an American classic that grew up along a trail blazed by George Washington, sent in 1753 to discourage French
settlement along the frontier. Farmers followed, giving the region its country character and
prized hand-built barns. The town serves as a business and cultural hub, with its own baseball
team, thriving downtown, community symphony, theater and barbershop chorus. The Maridon Museum, founded by local philanthropist Mary Hulton Phillips, houses an excellent collection of Asian art, and the Butler County Historical Society maintains an old settler’s cabin, schoolhouse and the landmark 1828 Lowrie Shaw House. Butler owes its star on the map to the Jeep, invented there just before World War II at the town’s American Bantam Car Company and still celebrated in August
at the Bantam Jeep Heritage Festival.''

As for the photo it is of the neighboring Lyndora area. The photo was taken from Hansen
Ave. facing west. (The western boundary of the city of Butler ends at Hansen Ave.) In the center of the photo is St. Andrew Orthodox Church and in the upper left, St. Fidelis/St. Stanislaus Kosta Church.

One can read more at //www.smithsonianmag.com/travel/The-20-Best-Small-Towns-in-America.html#ixzz1sqqaMtZ5

That's a wonderful photo, and it adds much to my perspective and memories of Butler. I grew up in Pittsburgh, and we were always visiting my grandparents up in Butler. My great-grandfather had a farm on top of the hill to the north going out of town on Rt. 8, and my grandparents lived in the house they built on the former family farm, just above the cut where the 422 Bypass now runs.

All I can think of is Lyndora Football in Phys Ed. Get the ball and run,no rules,no penalties. Just good old Coach Voelcker

What was the name of your great-grandparents that had the farm?

I had the privilege of student teaching at Lyndora School in 1974, and then I taught there for the next year and a half...until we moved away. Fond memories.
JoAnne Forcht Ripple

I recall two things about Lyndora, first was the rolls from the bakery. We used to have them on Sunday mornings, they were so good! Second, we lived in Meridian, but I was selected for a special school program for the 5th and 6th grades in Butler so rode a bus to Lyndora school and then jumped on another bus to Butler both of those years.