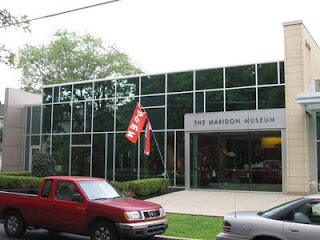 The Maridon opened on May 8th, 2004. It is the only museum in the Western Pennsylvania region with a specific focus on Asian Art and Culture coupled with German Meissen porcelain. The museum — both the objects and the buildings that house them — is the gift of Mary Hulton Phillips.

I hope she left a LOT of money for this because it will never make it on it's own.

I don't know about that. From what I hear the place is thriving. Lot of Pittsburgers and school classes coming.

Oh yes. Folks are just lined up to take a look at Chinese knick knacks.

Doncha just love it when the anonymice intellectuals weigh in?

I hope the world is full of R. Wertz types. If not , the Museum will go belly up. It's too bad we don't have more intellecuals like R. W. around but most regular people have so many distractions and interests that they will not be viewing oriental art or artifacts.
Why do you think the Maridon is constantly looking for funding sources?
One question for the intellecual R. Wertz. Do you really think that the Maridon can survive on ticket and gift sales alone. Try to be honest.

You better be sure that Mrs. Phillips left a lot of money to keep her project going.

In a previous postie, Anonymous said..."I hope the world is full of R. Wertz types."

Gee whiz and by golly, I would fervently hope not! Just think what it would be like to have everyone driving a Bantam Car...made in Butler, of course.

Then Anonimice goes on to opine,'' ...most regular people have so many distractions and interests that they will not be viewing oriental art or artifacts.''

Yes I would agree that folks need to lighten up and embiggen their minds!

>"...Do you really think that the Maridon can survive on ticket and gift sales alone?"

I have no clue as to the survivability of that effort...especially in Butler, but one would hope so. One would also suspect that the founder would have anticipated there might be a dearth of interest in her passion and provide for it as suggested in another post.

I believe you are confused...a 'tshatshke' is a bird (British)...a Brown Breasted Bed Thrasher...perhaps you are thinking of a Russian nested doll, a matryoshka...and you should stop doing that.

Hey R. Can't we all just get along?

A matryoshka doll, or babushka doll is a Russian nesting doll (Russian: Матрёшка) which is a set of wooden dolls of decreasing size placed one inside the other. The first Russian nested doll set was carved in 1890 by Vasily Zvyozdochkin from a design by Sergey Malyutin, who was a folk crafts painter at Abramtsevo. Traditionally the outer layer is a woman, dressed in a sarafan, a long and shapeless traditional Russian peasant jumper dress.

Anonymous said...
>Hey R. Can't we all just get along?

btw....when I was a kid, there was a bocce ball court on ,I think, Center Avenue, just before you started up the hill, and strange looking old men, speaking some kind of strange sounding language, smoking strange looking skinney cigars would be rolling strange looking balls at I-never-knew-what and they would give you the "malocchio' as you passed by. Obviously, you could not get along with them...at least until High School when you began to notice those beautiful Italian gals!

I am there with you R. I love those beautiful Italian girls!

Sorry for the mean things I said about the Museum. I hope it does great.

perhaps R.Wertz & anonimice can stand outside of the gallery and perform this schtick and donate their earnings to the museum

I just love to watch for their quips. It makes this site so great!

Thanks to Ms. Phillips and her family for making this wonderful donation to downtown Butler. I would say to some of the people commenting here that culture, antiquities and history are not things to be afraid of, no matter how ignorant one is of them.

Does one have to be afraid of culture, history, or antiquities to point out that the Museum most likley will fail unles MRS. Phillips left enough money to keep it going. I think that the above anonymous is too ignorant to get the point.

Mrs. Phillips did so much for Butler. For the sake of her memory I hope it survives.

The Sedwick family that owns Armstrong could learn from Mrs. Phillips example.

There is another art collector in town who has a fabulous collection. His name is Koch and the collection is at Elm Court. Let's hope he shows the generosity that Mrs. Philipps showed.

Now that's a collection I would pay to see.

Sadly, I read a notice in the Eagle that it will be closing. Too bad it didn't have different types of artwork also. Topic appealed to a very narrow clientele.