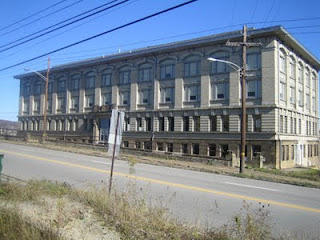 Information about the sale.
Posted by Charles at 5:32:00 AM

Does anyone know how many tax dollars have been wasted in an effort to bring this thing back? It sits on the same property as the great bus station where millions of dollars were thrown down the rat hole so that a half dozen welfare leaches can ride around in busses.
Hey John Paul, how much does it cost to run those busses and how much money comes in from the riders? Hahaha.

I think its a good reminder of how well the unions can help the community.
Way to go, those negotiations in
81- 82 did alot for Butler.

I always wondered if one reason the company went out of business was because they built cars too well. No planned obsolescence; I bet the vast majority of cars built in Butler are still on the tracks somewhere; maybe the trucks have been replaced, but you wonder if a design defect IN REVERSE contributed, at least, to the demise of Pullman Standard in Butler?

Pullman didn't go out of business because of the unions. Even though that union didn't help any. It was called the lack of demand for railroad cars.

I left Butler in 1965 but I remember that Junior Achievement used to meet weekly at the Pullman Standard Building. Junior Achievement was a really good activity for yourh. Volunteer leaders in the Butler Business Community worked with teams of high school students that made products for sale. It provided a practical application in production, inventory control, sales, marketing, bookeeping, etc. Our product was custom made door mats (decomats) that included the byers initials in the design. The fact that business leaders would give up several hours a week to work with kids made the program special - our mentors were executives from Nationwide Insurance. I wonder if the progams exists today. We also had fun exploring the building during breaks - we met after hours.

I participated in Junior Achievement too---we were sponsored by ARMCO and we made stainless steel shoe racks---I think my mother still has one. This was in 1960/1961. It was a good experience for all of us.

Our group made flower pot holders. The experience was invaluable. my dad was one of the those business leaders.It brought us closer together.

I worked for Nationwide in 1965 and was a Junior Achievement mentor at Pullman. I enjoyed working with young people so much that I left Nationwide and became a teacher. I retired after 32 years in the classroom.

That's a very uplifting story Mr. McDonald. Thank you for sharing it and for your service to youth

We were under the impression that Pullman Standard did NOT go out of business, just moved out of Butler. Think they either started a new location in Alabama, or else they combined the two plants. Does anyone know if this is correct?

Wouldn't it be nice to get about 50million stimulus dollars to remodel and make a bigger nicer office building for the bus terminal that is on the same property. It would be a shame to waste such a fine building. Remember, stimulus money is free. It comes from the government.

Pullman was bought out by a company in Ft. Worth and they are no longer building cars under the Pullman name. They do have a plant in Birmingham which is still in operation.

I worked there in 1980-81, when it closed. The company was purchased by Wheelabrator Frye. They then closed the Pullman Standard division factories. First Chicago in 1980, then Bessimer Alabama in 1980, the Butler in 1981. They just closed everything. Employees from all of the factories went to work for other companies, GATX, Trinity, Union Tank, etc. The Wheelabrator people bought the company for the pullamn Kellog and Pullman Rust group. The rail car bsiness was not in their interest. Finally, the tax advantages to buying and leasing out railcars expired, so the investment community stopped buying cars. So yes, there was a glut of cars.

I saw there was talk about JA. I was in the Pullman Standard JA group back in the early 80's and, if I remember correctly, we met at the Intermediate High School. One year we made hot dog sticks (for camp fires) and the other year we made pen/pencil sets out of the rail. My Dad still has his. They are heavy and had a name plate and box car on it!

How people forget. Or just do not want to admit the truth? Pullman closed simply because of the greed of the union. Pullman wanted a .50 cent pay decrease, and to drop the 13 week paid vacation. That is right, for those who didn't know it. 13 weeks PAID vacation. Workers got one every 4 years. And they could elect to work AND take the vacation pay. What company do you see giving 13 weeks paid vacations today? Pullman said there was no room for discussion. Take it, or the plant would move. The union reassured the workers that Pullman wasn't going anywhere. Guess who was wrong. They DID move the operations to Alabama. Wheelabrator Frye bought up what was left after Pullman locked the doors. Not before as Toneo said above. I know all this because a lot of my family worked here. Including my mother and father & 2 uncles who were bosses there. One of them went to Alabama with the move.

My grandfather was the President and CEO in the 70s. They didn't go out of business nor was it the decline in demand of rail cars that caused their spin offs. The company was well diversified in manufacturing, engineering, and consulting. The board decided to sell pieces of the company for considerable profit for those large percentage holders. There were a lot of hungry companies that wanted a piece of the future logged business that Pullman had. Thats why they sold out. It was a Buy-Out.