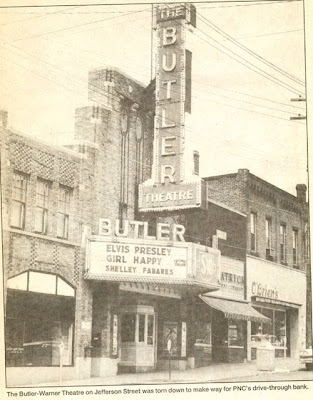 The Butler Warner Theater on Jefferson Street was torn down [1960] to make room for PNC's drive-through bank.
Posted by Charles at 5:02:00 PM

of course it was!

The Butler Theater was built in 1929 by Harris Amusement Co. and the Warner Brothers theater chain bought it soon after it was built. It was touted as "one of the finest in Western PA". It once hosted band leader Glenn Miller & Sally Rand the fan dancer. The Butler Theater only showed first run Warner Brother films and its companion the Majestic Theater showed the second run Warner Brother films. The theater was razed in 1965 to make room for PNC's drive thru bank. Info from Butler Eagle Progress 1994 March 25 & 30.

Homer Tack & Sons demolished the building so the bank could be built. The big statue of a robed woman that stood at the bottom of the stairs to the balcony is still owned by the family.

The BHS Class of 1952 was so large, (How large was it?), 483 +/-that the commencement had to be held at the Butler Theater. Oh, what a nite that was. Some years later, a classmate went to the trouble of making a wooden replica of the place to be given out as a reminder. It's around here somewhere and probably should be sent to the school to be placed in the glass display case as a memento of simpler days...if I can find it in the dentritus of the past's accumulation.

Remember the ARMCO movie days when nearly everyone got to see a movie and walked away with some really great candy bars.

Thanks for the Armco memory. Money for candy and movies was very scarce in our household so the movie days were a wonderful treat. I remember seeing Bob Hope in The Seven Little Foys.

Theater was designed by one of America's most renowned theater architects John Eberson. It was built by Butler's Harry Wimer who was also the builder of many of Butler largest buildings including the Butler Savings and Trust (now the new PNC Bank, Elm Court, TW Phillips Gas Building, and the Butler Senior High School (now Junior High). What a shame it was torn down for a now closed drive-thru bank.

Were any vaudeville shows featured here?

I do not believe Vaudeville shows performed here. This was built as a movie theater. Vaudville was performed at the Majestic Theater a couple of block away. This building is still standing.

I attended the very last movie shown at The Butler Theater. It was a Saturday matinee showing of "Mary Poppins". The manager allowed us kids to trash the place when the movie ended. What fun!

What a shame this was torn down for a now out of business drive-in bank. Our city fathers called this progress. It is too bad this beautful theater was not preserved and a performing arts center. We continue to have the same non-thinking people on our city council. For instance, Maggie Stock just had the first bike rack installed by the car parking lot on Main Street. Yes, people that ride their bikes will take them off their cars, attach their bikes to the bike rack and then go to whatever business they are going to patronize. Just shows the overall lack of understanding of Main Street by our city leaders.

My memory of the Butler was sitting in the balcony (every theater should have a balcony)watching the Saturday double feature (Murder at the Rue Morgue and War of the Worlds) as an 11 year old and having nightmares for several weeks afterward. My buddies sister worked the ticket window so we got in on a kids ticket well into puberty. Ha Ha Very few movie houses had that kind of character. The Penn was pretty plain by comparison.ep

Does any body remember the dairy store on the lefthand side of the movie house? In my mind's eye, I see a big plate window with a counter with stools, and your milkshake was served with a full glass plus the silver shake maker.

I remember the Butler Theater so well. I went there with my little brother. I also saw Gene Krupa the famous drummer there. Herold's dairy next door gave you all the buttermilk you could drink for $.05. My mom would give me $.50. With that I could go to the movies with my brother and have a huge nut sundae for each one of us. The movies were $.10 and we would stay all Saturday morning.

Where did Homer Tack and Sons take the debris from the demolition? It might be neat to see what cool stuff one could find?

Bob Somerville
I ushered there my jr.and part of the sr. year in high school class of 44 ,remember the uniforms we wore like tuxs. today.My cousin Bill Somerville ushered at the Penn theather as did my best buddy Dick Pesci class of 45 we saw every good movie that came to town for free .Herolds dairy next door was the best Dick palmer was one of my best friends also, good memories.

During WWII my good friend, Ralph Adelman, was the manager. He told me that he would see several patrons pay to enter the theater to only watch the news reel. After the news, they would leave the theater. Remember that TV was invented before WWII but was not allowed to be produced until after the war. There was radio but no visual view of the war effort.

I also remember going to the Butler Theater at Christmas when ARMCO reserved the theater. It seemed to me that each year the same movie was shown, Heidi. I remember seeing it several years in a row. I looked it up on IMDB. It must have been the 1937 release with Shirley Temple. We did get a nice bag of candy and played games before the movie. It made the Christmas season special. We felt special that our parents worked for ARMCO.