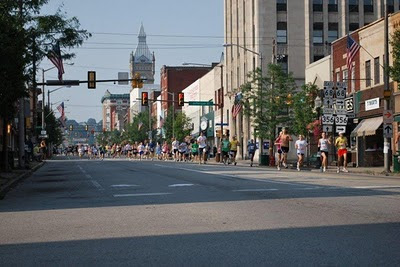 Hundreds of runners filled Main Street this morning for the 35th running of the Butler Road Race.
Rob Miller, 21, of Butler won the men's portion of the 2k race with a time of 6 minutes, 19 seconds, while Jessica Bennett, 16, of Slippery Rock won the women's section with a time of 7:45.
Race results and times are unofficial.
The road race, sponsored by Butler Health System, raises money for scholarships for high school seniors

This race is a great Downtown tradition.

so is running to the Burger Hut from the court house

another run to the welfare office in Buler. ho hum

they don't run to the welfare office, they ride in a tax payer subsidized vehicle

It is very nice Butler still has the Great Race. Don't think there were as many runners this year as in past years.

A 2K race? I've never even seen one of those. Isn't it at least a 5k? Man, that race has certainly gotten shorter.

thats because Butler is obese! We dont want to kill these people.