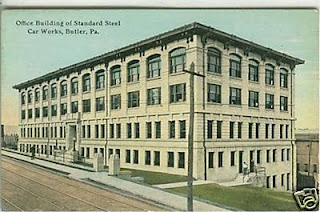 We sent railroad cars out across the nation.

I remember going to Junior Achievement there in 1963-64. It was in the basement rooms. Heck,I don;t even know if JA exists anymore but it was a good experience.

It was George Pullman who got the idea for the "Pullman Car" while on an uncomfortable rail trip. Interestingly, after his death in 1897, Robert Todd Lincoln, son of Abraham Lincoln, became company president.

Its nice to see an attempt to restore this fine building

JA does still exist. My class had two weeks of it last month. It is an excellent program. Remember the old Bonanza across the street from the Pullman Building. Bus boys used to throw old potatoes across Standard Ave. into the windows of the vacant Pullman Standard Building.

When we hear about a "nice attempt to restore a fine building" my guess is that the tax payer had best bend over once again.

The building is privately owned and has been privately financed.

The Pullman site was the site of the original Butler Fairgrounds. After Pullman came to Butler, the fairgrounds were moved to where the high school stands today.

several people have attempted to refurbish this building and have run out of money doing it. Hopefully these people have deep pockets

I know of at least one occasion that public money was used to try to bring this old cavern back to life. I am not sure that a private individual would tackle this one.

Tear it down and put up something functional that won't be a drag on taxpayers, like a parking lot or toxic waste site. Better yet, convert it something that will serve the law-abiding community, like a medium-security, triple-razor wire prison.

Let's put a family of welfare scumbags in each office. Oh wait, first let's remodel the entire building with taxpayer money. Then let's watch them trash the place. Then we can rebuild it again. And so it goes.

I think its a great reminder of the union that refused to take a pay cut in the early 80's and put alot of people out of work(2,000 or more). I believe they were asked to go from approx. 10.50 an hour to 8.00 for three years so the co. could survive. The union said no like they always did.
So Alabama got a railroad car plant and workers for 5.50 an hr.
I made 3.50 an hour in 82 in Butler and thought those men at Pullman were fools because there was not any jobs here that paid that much at that time.
So you whine about the hud landlords and the rundown conditions of town, stop and look at this bdg while your at Kmart which pays minimum wage and thank a union for the death of our town.

I know a person who was sent from Butler to the Michigan City Pullman plant as a manager to turn that plant around. He had his men go to schools to be the best welders. He did turn it around and they where making money until Pullman decided to pull the plug. He had a special button on his desk installed to lock the doors in case of death threats. He had men coming to the plant with guns. The manager had to get out of town in the middle of the night. Found out later his house was burned to the ground.

Butler is still a prosperous communtiy. Pullman didn't kill the city, it was the automobile and the car culture and change from locally owned stores to large chains. I am not making a judgment, but a statement of cultural change. Also, the welfare system and HUD housing as people deemed a sign of success is to move to a housing development from the city and thus driving down real estate prices which have allowed the slumlords to move in.

Compare cities in Europe to American cities. Why are they still vibrant? High gasoline prices have still made it enviable to live in town and walk, bike, or take public transportation. Also, not having a large population of minorities populating the cities.

Spent many evenings in that old building for Jr Achievement during the late 1950's. Fun times.

Pullman was always a plague on the community. During the 50's they gave their employees just enough work to keep hope alive, then left the taxpayers to support them on unemployment the rest of the time. When Nixon cut the deal with the Soviet Union to supply wheat in the early 70's, they boomed making cars to transport wheat. When that ended,so did Pullman. I knew someone who worked in management and their employer-employee relationship was something from the 19th century. It was Pullman that was the company that hired goons to break up a strike in the infamous Haymarket Square riots in Chicago.

Pullman-Standard provided employment for both my grand parents, my uncles, my one cousin and my Dad before WWII. My Dad worked at the Armco after the war. The men and women who worked at these plants made Butler and Lyndora a very properous place to live. Where do you see a company last that long today. The people who worked there were very religious, there are were six churches in the Lyndora area. Four still are active worship sites. The former St John's Catholic at the bottom of Penn Ave and the former Presbyteran Church on Penn Ave were closed several years ago. That being said, the workers also did a lot of drinking to. A tyical hard working western PA town.
PS: I also was in JA and Armco Troop 16, graduated in 1965