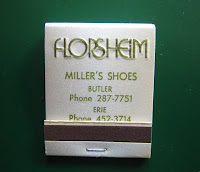 A perfect example of a business given to the third generation. They haven't spent a dime on their store in 30 years. The professionalism their grandfather used to create a great business has dissappeared. What a shame. I still buy shoes there, but Jimmy, Tony and Johnny just don't get it.

it looks like the shoes are 30 years old too.Would look but never buy in there. BORING!

charles, can you show us anything that brings happy thoughts here or something that has not been torn down or trashed in Butler mr. doom and gloom. or start fights? hmm. Isnt hard to write a blog about a place you have not lived in for over 30 years?

The Butler Charles lived in no longer exists.

I was in Miller's about a year ago to get some shoes for my elderly Mother.
Now I haven't lived in Butler for 25 yrs and have come to expect the poor and impersonal service of the larger city.
It was a pleasant surprise to deal with people that weren't in a hurry and were more concerned with our satisfaction and needs rather than rushing us to the register and out the door, just like it was 40 yrs ago when I was a kid.
I would like to thank the Chipreans for their dedication to good service,I'll take that over Walmart any day

i would never buy shoes in walmart. Elcheapo!

OMG. A kind statement! Could Butler be experiencing a Renaissance of mind and spirit?

Don't shoot the messenger. Interperetation is in the eye of the reader.

As a youngster I was never allowed to get shoes there as my parents thought they were too expensive. Classy store though. I guess Butler has changed since I moved away in 1964.

I personally have had nothing but good service from all emplyees of millers shoe store.

Although we were poor during the 1950's, I did buy my first pair of dress shoes at Miller's and they lasted for many years. I think the other shoe store at the time was called Kenney's -- where we bought the popular "white bucks" of the day, as well as first bright colored sneakers and basketball shoes. Fond memories ... Steve Gray

Got my first pair of Hush Puppies at Millers. LOL

The other store was KINNEY'S. Also a great store was Ralph's. Another was Teek's. (MY favorite for fashion!). Ralph's had a machine that you could "see" your bones inside the shoes to be sure it was a good fit!! (This was mid 50's.) I can actually still picture where these places were along the main street. Troutman's had a nice selection of shoes as well. Got my Bass Weejun's for collge there, as well as my Chicago roller skates for skating at Castle Roller Rink!I've only been back to Butler 3 or 4 times since the late 70's. Each time was sadder, as the places of my childhood changed and disappeared. Just have to accept that WE too change as disappear from the scene as well. Thats why we have memories.

I remember as a kid in the late 40's or early 50's going into Millers and having my feet x-rayed in the foot machine at the front door. I wonder how dangerous this was.

Annon said:
"I remember as a kid in the late 40's or early 50's going into Millers and having my feet x-rayed in the foot machine at the front door. I wonder how dangerous this was."

Bill Kidd (owner, at one point, of the Kozy Korner up on a corner of Second Street...not the Inn) had a shoe store on Main Street. Bill also had a fluoroscope. We would go in there and look at the bones in our feet...not too bright but then, at that time, there was limited knowledge generally of the dangers of radiation. I guess no one connected the fluoroscope devices with similiar A-bomb x-ray radiation. Thus there were trivial uses for the technology such as the shoe-fitting fluoroscope used by shoe stores in the 1930s-1950s.

Dangerous? Edison,in 1903, abandoned his work on fluoroscopes, saying "Don't talk to me about X-rays, I am afraid of them."

I can remember the fluoroscope at Bickel's shoe store [near Aland's] on Main Street.

I remember the flouroscope in the shoestore on Main St. Stood there and looked through the viewer at the bones in your feet. Lots of nasty unsafe things going on in the 50's. Armco was venting the fumes from the pickling plant right up the stack which sent people with breathing problems to their final reward. Also remember all the red water in the streams from the coal mines.

I too remember seeing my feet bones at Millers in the 1950s - pretty certain - the machine was back some in the store. My parents always asked for Mr. Kemper. Does anyone remember him or who he was? I recall him as a grey haired gentleman who sold my parents many pairs of shoes for me...Andy Shaffer