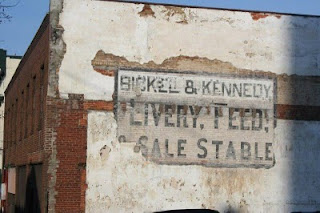 They tore down the old Army-Navy Store to make a parking lot for Young's Funeral Home across the street and this is what we see now on the side of the building.
Photo: Dick Vernon 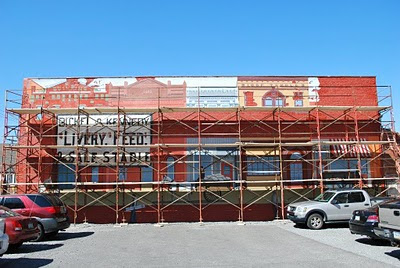 i understand that they sold the world's first wild bird seed there.
I did not want that because it drives my birds crazy, crazy I said.

worlds first...think not, butler is regular.

Butler is so good at making parking lots. come to Butler ...see our parking lots, you will never want to leave.And dont forget to buy the post card.And thanks Charles for all the great destruction reminders.

bring back WOOLWORTH'S!!!!!!! i need a luncheonette sandwich now.

pretty neat picture, you can still see some old signage in Lyndora on the tops of some of the old bdgs that are in a foriegn language from the early 1900's

Concerning the above comment:
If someone could take a pictures of old signs in Lyndora and send them to me I would gladly post them in this blog.

I like this photo! Does anyone know anything about the store Bickel & Kennedy?

typical pic of butlers decay what a joke of a town, I suggest no one move here with children and think they will have a good life in the city, or think you will be safe here from the element just not happening, anyone who moves to butler by choice is in for a rude awakening if they think it is a favorable place to live, unless of course your on welfare then it is a gold mine.

Is the Army Navy Store no longer? Did it relocate somewhere?

The Army Store has relocated ot Main Street. It is across from the First Commonwealth/Bank Pittsburgh.

This parking lot, the former "Army Navy Store" was "Freidman's Golden Dawn" before "Army Navy" moved in. When Milton and Hilda Freidman closed the Golden Dawn, they bought and operated the Dairy Queen down on Rt 8 in Penn Twp. at least into the late 60's when I left Butler.

Bickel & Kennedy was a horse livery barn not a store. Its "hay" day was in the 1890's. West Jefferson Street in those days was a horse trader's emporium with more horses being bought and sold there than any other part of Butler Co. Henry Bickel & William Kennedy ran the horse livery barn. Bickel was regarded as the "king bee" of the horse traders. Kennedy was burgess of Butler. Info from Butler Eagle, April 14, 1925. The new mural being painted on this wall is a reflection of this horse & buggy era. Looks great.

The artist who is painting the mural is a young woman whose name I don't know though I think there was a story about this project in the paper. She has done a wonderful job. Yes, Butler is a shadow of it's former self. We have lost a lot of good companies, and those that remain, don't seem to be very active. So it follows that good people will leave. To those of us who remember the "good old days of Butler", the area now feels empty of life. Sadly, no one here seems to know how to fix our problems. Painting a mural fixes an eye sore, but we all know it's just a drop in the bucket. The big question is, "Will our little town survive?"

will thee livery logo be incorporated into the new facia?

Anon said: "The big question is, "Will our little town survive?"

Perhaps I shouldn't put my $0.02 in this discussion 'cause I left in '55 for what I believed were 'greener pastures'. There didn't seem to be much opportunity for young folks then and what little manufacturing was going on was not tempting. Perhaps the drain was lack of imagination-maybe wanderlust-remember many young guys left their sleepy villages and towns to go to sea and see the world ago.

So, who knows if Butler will survive...it may be past the tipping point for survival. For sure, however, we all know its demise is Bush's fault!

I grew up in Butler during the 50s and 60s. I have lived in many, many places since then around the US. Tell me what small to medium sized towns have not gone through the same, sad demise? Everywhere I have lived, the downtown is but a shell of itself. Face it, this is a sign of an economy aging. I do like to remember the Butler I grew up in and thank Charles for posting the memories.

Mural artist is Rabecca Signriello of New Castle an a 1999 graduate of Moniteau High School.
The old Livery logo is being enhanced and is in the mural.
But now the mural stirs a debate in city council because the artist has put names of project donors in the mural windows and some do not like it and council has to decide between artistic license and advertising: petty politics I say.

Total Urban Palimpsest, I love it.

This project is finished and looks great. Maybe someone has a photo they can submit for posting?

We have a photo of the finished mural. If we can figure out how to submit it for posting, we will try to do that.

Yes, send it as a digital jpg. file and I'll get it on the blog for you. Thanks. Charles

We weren't exactly sure how to send the photo of the finished mural. We tried sending it to clcing@web.de Hope you received the photo. We're not too good at this technology.

Yes, I received it with many thanks. You will be seeing it on the blog in the near future.