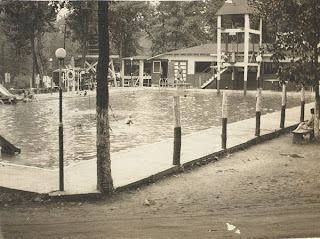 How we pestered our parents to take us to Stoughton's Beach for a day at the pool.
Posted by Charles at 3:56:00 AM

I just watched the Butler 1940 DVD and they show Stoughton's swimming pool being filled with water for the 1940 swimming season. The DVD also show the carousel running. The horses from that carousel are in the Smithsoniun in DC.

OMG, what memories this brings back from childhood! Yes, I begged my mom to take me there along with my cousins. I haven't been to PA in almost 30 years. Is it still there? If not, what is?

The remnants of the pool are still there.

Soughton used to advertise a "heated pool" What he left out was it was heated by the sun! Later called Rock Falls Park up until it's closing. Anyone remember the skating rink and the weekly teen dances?

How about getting there early so you could get a "good" rock to spread your blanket on so we could lay and get a tan.

In the 1940s my great uncle used to do the fire dive off of the 20 foot tower! They lit the pool on fire and he would do a suicide dive into the fire and swim through it. His name was Floyd Summerville.

Playing in the pool with my two older brothers, Jack and Chuck, I was climbing out of the pool when jack grabbed my hand, to pull me back into the pool, I got my leg caught in the ladder and bent my knee the wrong way, hurt like hell and walked with crutches for a week, never saw a doctor, the good old days, regardless.

check out what the folks at Rock Falls have been doing with the property..it's very nice out there, now. :)
rockfallsonline.com

When I attended Center Township Consolidated, we always went to Stoughton's Beach for our end of year class picnics. Remember the merry-go-round very well because I rode it very often. The pool was great and uncrowded compared to the municipal pool in Butler. Don't remember the gypsy lady but she probably wouldn't have made much from us. Ha! Ha! They wouldn't let us go out on the rocks. The three main parks I remember from the fifties were Stoughton's, Conneaut Lake (the Blue Streak roller coaster) and, of course, Kennywood with a great wooden coaster.

What a thrill it was for us as kids to go to Stoughton's beach. Down over the hill were the slippery rocks. I can just smell the chlorine in the water. We spent many an hour enjoying all the fun at Stoughton's beach. Almost as much fun as Alameda Park.