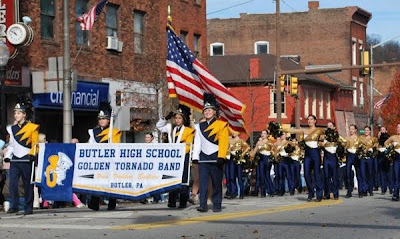 What a day in Butler. I feel like I was there.

It was a perfect day for a parade!

BHS band...the only school who cared enough to show up...even after marching in Philly the day before!

I always enjoyed the parades in Butler. But I must admit I much preferred the all "golden" band uniforms from when I was in the band in the 1950's.

I have to agree with Steve. After all the name is the Butler "Golden" Tornado Marching Band!

At least the band uniforms are better looking than years ago
when they were bananna yellow
with the big heavy hats. Mr.
Gibson was our director.

Ah yes. I remember that Rick Mclain was the drum major (1965) and wore a hat that was almost as tall as he was.I used to wonder how he kept his balance doing the marching routines.How did you do it Rick?

Rick had the same hat that I did as drum maor in 1972-73. It really wasn't that heavy. I think that it's purpose was to make us look taller when we did our "strut" onto the field for the pre-game show. All of you ex-band members should come out for Alumni Band Night each year at homecoming, like Rick and I do.

Senior year in 1957-58, 6'7" Gary Glenn was the drum major, and was quite impressive under that tall hat. We took a lot of pride in those "golden" uniforms and even the heavy hats. White buck shoes were also worn in those days. Lots of great memories of those band days.

Have many fond memories of standing on the sidewalk and watching the parades on the 4th of July and Veterans Day. Besides BHS band, my favorites were Meridian Drum and Bugle corps, Catholic Daughters of America and the Slippery Rock State College "Rockets". Most of the local volunteer fire depts. sponsored marching musical organizations,mostly D and B corps. Parades were very big in Butler.