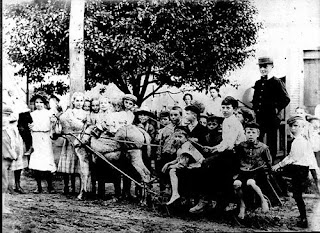 [Photo taken by: Walter Ammon][Photo thanks: Richard Sanders].
Posted by Charles at 4:09:00 AM

Hello Charles,
I remember that Photo well;however it amazes me that you found a way to identify some of the children in the photo.I didn't even know the identity of the man who had taken the photo (Walter Ammon).My Grandfather (W.Clyde Sanders) used to tell me many wonderful stories of Butler City and The Sanders Family.When I was quite young I remember my Father (Chester Sanders)taking me to visit our relatives who lived in their home on First Street.I think that home was torn down and replaced by a building occupied by Bacher's Ambulance Service at present.I was told that before Bacher's that the tenant was "The Coco Cola Bottling Co."Supposedly there was an Artesian Well on the site and they used the water to bottle their drink.I think that the "Good Old Days" were very special and provided good times that really can't be duplicated.
Thank You,Richard Sanders

The "Good Old Days" could be somewhat duplicated IF everyone would stop the name calling, killing and being so greedy. We the people have control of some things.

I am wondering if the photo was taken by my grandfather, a bookbinder and artist whose studio was above a photography shop which may have been called De Coux Photo (this may have been later). He was born in 1877 and his name was Walter W Ammon. Both my parents were born in Butler (I was born in New Castle) and I still have relatives there.

Anonymous..The grandfather you are describing was my grandfather too. I used to visit from AZ. and go up to his studio with the scary door that opened to a 2 story drop to the ground below. Grandpa used to spend winters with us in AZ from time to time. He had a great time playing checkers in a Mesa park with his other winter visitor buddies. What a wonderful man he was, I loved him so. I still have lots of his paintings. My parents were Walter F. Ammon and Rosalie Coll Ammon, both born in Butler. (I was born in Harrisville) and raised in Arizona.

Does anyone have information on Walter W. Ammon? I have just acquired a violin, and the maker's name is Walter W. Ammon Butler, PA 1923. I actually grew up and still live in Butler.
E-mail scott123@zoominternet.net

I have a painting by Walter Ammon. Seems to be very old of the slippery rock creek. Any information anyone can provide please message me at jcastoak@aol.com

Walter Ammon is my grandfather. He got very depressed when his 7 year old son Harold died. His doctor told him to start painting. I used to go with Grandpa when he would play checkers against 30 people at the YMCA and he would beat them all. In cas you didn't know Dave Ammon's son, David, lives in Seattle and fell out of the open door of Grandpa's studio and walked away without a scratch. I used to go hunting with Grandpa and he would dress the deer in his studio. Think of all the wonderful books he must have held

My grandfather and mom and dad were fighting over which football game to watch on his little B/W TV and they gave me, still in diapers, a flyswatter as a toy to keep me occupied. It was early fall and very warm so they had the door open to try to capture some breeze. I joyfully went about smacking at every fly I could find. The flies soon figured out how far I could reach and they would light, tantalizingly, just beyond my reach so I naturally threw it at them out the door. Realizing my mistake instantly I decided to retrieve the swatter at all costs and dove out into space. My mom saw me throw the swatter and follow it out and ran to the doorway.

I hadn't gone far. There were arms attached to the building, under where the catwalks had been, holding up 3 high tension wires. I was sprawled across all 3. My mother was panic stricken and was holding onto the door frame with such intensity that my football playing father could not budge her or coax her out of her shock so he couldn't get to me before I laughed and rolled off into the abyss. Really good thing mom. If dad had touched me we both would have been grounded and perhaps died of electrocution.

All 3 adults rushed down stairs, my mother screaming the whole way, gathering a crowd I heard. My father jumped down into the pit and began to frantically search for me. Took awhile for him to realize I had fallen head first into a pallet of 2x4's....that had been there for years and were completely rotten and spongy and all that was visible were the bottoms of my feet. I was crying up a storm when he got me out of the wood and out of the hole and my mother was hysterical and wanting to rush to the hospital.

Grandpa Ammon had had a bunch of kids of his own and had had no money to speak of so he had calmly spent a nickel on the way out of the lobby on a bottle of Coke. He told my mom to calm down and give me the Coke. My mom questioned his sanity and asked what good that would do. Grandpa also knew we had no money at the time and gave this sage advice: "We will find out 2 things right away. First, we will see if he leaks and that's bad. Second, if he doesn't leak and he stops crying he isn't hurt, he's just scared. If he leaks or keeps crying then spend the money for a doctor."

P.S. Holly, sorry about Ruth. I don't have anybody's contact info in AZ anymore so drop me a note if you want to talk sometime.