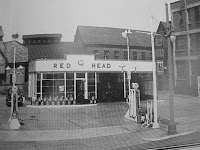 You can see Butler County Motors to the right; the buildings behind the gas station were all torn down to allow expansion of the Ford dealership.

Judging from the car partially visible on the left, the picture's got to be from the early 50's, I'm guessing.

I remember getting gas there at 23-25 cents per gallon.

Back in the late 30s or early 40s, my friend, Vin Cooper, and I were practicing night photography and thought this new, brightly lit station would be a good subject. Someone apparently became suspicious since a Butler police car pulled up and wanted to know what was going on. When we explained, they laughed and went on their way and we got some good pictures.
Don Carlson

red head had the best coffee in butler back then.

I remember back in the early 60's
my Dad would always pull in there to get gas. My little sister and I would go in and get a candy bar.
That was always such a treat! We lived on Cottage Hill Ave. and that was always our last stop on the way home.

Remember the gas station along New Castle hill? Was it Red Head or something else? There was a talll, thin fellow who worked there for years and they had 100 octane gas.

The gas station halfway the hill was called Falcon. If I remember correctly, a second Red Head opened in the late 60's on top of the hill just past the Dairy Queen on the otherside of the road.

There was also a Falcon station on
RT 8 south. It was right across from the road that goes up to the college (steep hill). I believe that lot is now used for RV and trailer sales. And speaking of old gas staions, there also was a station called Payless that used to be next door (just north) to Acord's Dairy Queen on Rt. 8. I believe they closed in the early 1990's.

We lived off of Center Ave on Ziglar. I stated school at bottom of CA. We then moved to Metzgar off of south Main in the T'ship. My Dad always bought gas there on our way home or going out. Dad was transfered to Butler, from Vandergrift, as a government Ordinance inspector at the old Pullman Standard during WWII

When I first got my driver's license (1970) gas at Red Head was 33 cents a gallon. Same price as a loaf of Town Talk bread.

I well remember the Red Head station in the 50's since my Dad always bought gas there when we went to Butler. They were always in a gas war and prices went as low as 17.9 cents a gallon. They would wash your windows, check the air and oil and give you a glass for a fill up. Them were the "good old days".

There is still a gas station at 408 S. Main St. in Butler. Now branded MARATHON. Red Head Oil co. sold out to Ashland Oil in the 1960s and the brand is no longer active.