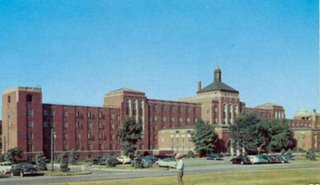 During W.W.II soldiers who had suffered hearing loss were treated here. Butler is proud of its service to the military.
Posted by Charles at 5:41:00 AM

Deshon was built prior to WWII and during construction, my friend, Wayne Myers, and I rode our bikes out to see it. The water tower had been completed and, since there was no barrier, we proceeded to climb it - we enjoyed a great view of the whole area.
Don Carlson
Palatine, IL

I have a copy of the history of the Deshon Army/VA Hospital that I got from an old employee of the VA, when I did a talk once at the Masonic Hall in Butler.
I'll have to hunt it up and dust it off....it's really interesting.

We also have several place settings of the Shenango China that is stamped "Deshon Officer's Club" (I believe).

My Father Was a WWII veteran and when returned from the war he worked there for years as a fireman and guard I still remember visiting the old fire house, but this picture brings back so many memories

DOES ANYONE KNOW OF A DR.DONALD ANGUS RAMSDELL.WORKED IN THE PSYCHOLOGY DEP. AT DESHON IN 1944 45?

TIMOTHY LEARY WORKED AT DESHON IN1945.

Does anyone remember Marlin Hazlett, WWII vet in Deshon for two years before he died in 1951 of tuberculosis? He was my Dad.

My uncle was a medic at Deshon during WWII and took photos of the hospital and staff.Most are mounted in an album with commentary but some are loose.Joe Lewis,Helen Keller and Elenor Roosevelt visited there and there are pictures of their visit. I am looking to sell the collection and wonder if anyone can give me information on how to go about it.

I worked on construction of nurses quarters at Deshon hospital in 1945. it was my first union job.

My mom worked there, starting in the early 1950s. I remember the gym and the swimming pool, which families of employees could use. Clear into the late 1950s there were living quarters for senior folks out there, head of nursing and so forth. It was a VA TB hospital until Vietnam got to going, and then became a General Medical and Surgical facility. As a kid I got to meet some of the long term patients, World War One vets who had been gassed. They had very tragic and hard lives.

I worked at Deshon in psychology and left in 1951 or 1952. Dr Ralph simon replaced me. I have been trying to remember the name of the doctor in charge of rehab. He was a homeopathic physician. any clue?

I was going through some old photos and trying to catalogue them. There were several unlabeled photos. I suspected they might be Deshon, and there was the picture on your website!
My parents met at Deshon. My mom was a nurse there and my father was wounded in WWII. They were married in 1948 and I am their 4th and final child. My dad has passed and my mom is now blind. I so appreciate your website. Thank you!

how did it get name deshon?

Does this hospital still exist today? My mom was there while serving in the WAC during WWII

I found a WW11 nurse badge ID Pin and I am wondering about it. I can't post a pic of it here. It says deshon general hospital on it with a pic of a lady and badge number is 285. Any info would be great.