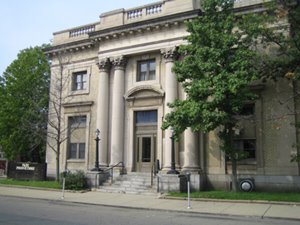 I can remember entering that door to buy penny postcards and 3 cent stamps. As I recall, it was considered one of the most attractive building in Butler at that time.

I remember the post office and being inside although I don't know why,perhaps to buy stamps or mail things for my parents.It was and is a beautiful building,sometimes I can't understand why this beautiful piece of architecture was abandon in favor of the sterile "box" on main street.Of course that has happened the nation over,you should see the magnificent and abandon post office here in Ft Worth.

Does anyone remember the blind man and his black seeing eye dog who sold items in the lobby? I always wondered how he told a five from a one,of course in those days no body would cheat him.I am afraid he'd be broke in a day in these times.Of course we have made other advancements,today,while he may be ripped off and beat up,he is visually challenged and not blind.We have made so much progress huh?

I guess sarcasim ids a curse of getting on in years.

I was born and raised in Butler until I went off to the Navy in 1945. However, the scenes on this blog are all engraved in my mind and bring back such wonderful memories. I, like all Butlerites, in the 30's and 40's remember this grand old building. It always made me feel that we had something like the buildings in the Nation's capital. I began working at Glenn's confectionary right down Jefferson street from the Post Office. I was only about 13 then. Congratulations, Charles, for these wonderful posts.

My dad was Superintendent of Mails and then Assistant Postmaster at that building. I remember going there occassionally after grade school to wait for a ride home and playing with the adding machine in his office. Glad to know its still standing, still in use.

We always thought this should have been used as the Butler Museum. It's such a great building and would have made a great site for our history.

I rememmber a Mrs. Bish who worked at the Post Office. She had three sons: Howard, Bud and Mike. I believe Howdie played for the Steelers. Mike was a Grove City athlete. Mike was President of Thomasville Furniture CO. I believe Bud retired from a steel company in Pittsburgh. I heard Mike is living in North Carolina with his wife (former Joan Duffy) Bud and his wife have located in Florida.

Ed Brody was the blind man that had the concession stand.I used to go after scoll and walk his seeing eye dog whose name was pancho.

My Dad had a P.O. box so when I was not in school used to go with him to pick up the mail. I certainly remember the blind man who sold concessions. I was dying to pet the dog but Dad said you shouldn't pet seeing eye dogs. Used to have to circle the block to get a parking spot.