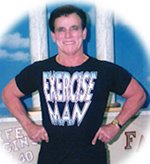 You have kept us, and later the nation, in shape. Thanks, Paul, for all those years of discipline and dedication.
°
[The show is aired 9:30 and 10:am Eastern time, weekdays, on the Cornerstone Television satellite and local public access channels around the United States.]

It is nice to see something thanking Paul for doing his great job.

I hear that Gaudino's show has been recogized by the Guiness book for being the longest-running fitness program.

He taught my brother and I to lift weights at the Y. Wish I'd have kept doing it.

its true he told me

Does anyone know if Paul "Red" Uram is still alive?

Oh wow I can't believe I forgot about this, my mom was on that show once. I think in the spring of 1981?? I was about 11 and boy was I impressed! thanks for the memory jog, pardon the pun lol Heidi (Purvis) Staggs

I know one thing....he has a really ugly daughter..yikes...what a beast.

[January 26, 2007 must have been Malcontent Day for children with too much time, limited vocabularies and Internet access.]

WOW! I went to school with his son Troy through the 6th grade. Every year we got to go to the studio and be on the show.. My first grade teachers' husband (Mrs. Weimer, Broad St. Elem the original not the "new") played the organ on the show

What about Marty Cypher? And there was a man who coached lots of stud lifters, from up around West Sunbury/Moniteau area? Who was that/

I remember Paul when he worked as a cobbler at the shoe repair store on Main St. when I was about 6 yrs. old in 1961. One of the nicest people I've ever met. Later, when I was in my twenties he was my neighbor on Mitchell Ave.