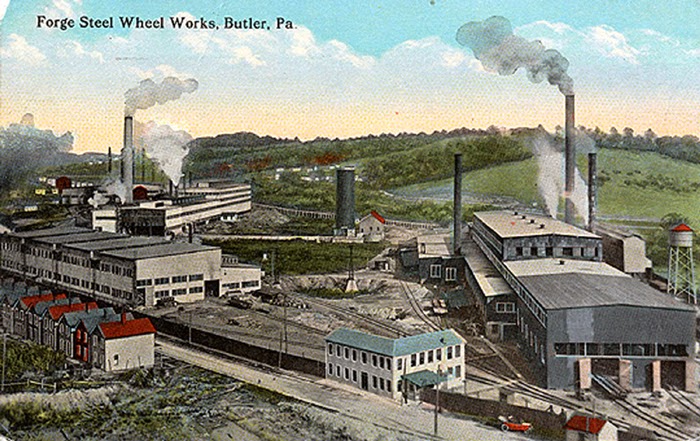 Butler Armco pumping out steel for the war effort back in the 40s.
Posted by Charles at 1:37:00 PM

Email ThisBlogThis!Share to TwitterShare to FacebookShare to Pinterest
Labels: Armco

I was born and raised in Butler and lived on the south side. I am interested in the history of the Franklin Glass Co. We called it the "glass house". I can remember laying in bed as a child on Ziegler Ave. and watching the lights of the crane as it moved over the plant. They built row houses on Hickory and South St. Any info. would be appreciated.

I also did my stint at the Armco before going to the Navy. I made $25 a week for a 40 hour week. Worked at Hot Mill, Inspection and Shipping. Hard and hot work but was a good experience. I was only 17 at the time. Now I am 79. Quite a jump but what a great life!

AK Steel [once Armco] Announces Capital Investment In Butler Plant.
04-13-2006
The AK Steel Corporation is a worldwide leader in the manufacture of electrical steels.
Those electrical steels are made right here in Butler.
The company -- in response to increasing demand for electrical steels, both domestically and around the world -- says it will invest $14 million in capital improvements at the Butler plant.
"We have announced some additional capital investment that will allow us to increase our ability to produce those steels at Butler," stated AK Steel spokesman Alan McCoy.
"The $14 million investment will be targeted at a number of small projects that will make the processing equipment more efficient, faster, of higher quality."
The capital improvements will be undertaken in two phases.
When the second phase is completed early in 2007, AK Steel will increase its total annual grain-oriented electrical steel production by about 50,000 tons, or 20 percent, to more than 300,000 tons per year.

My Dad worked at Armco for over 40 years, his dad too, my brother durning his summers back from college.

The first comment was from Richard Palmer-this sounds like the "Dick" Palmer I used to know from Bradin Ave. I lived on Miller St. We used to play ball on the old field at the end of Miller St. and then go swimming in Sullivan Run. The last time I saw Richard was on 5th Ave. in NYC and we spotted each other simultaneously and chatted for a few minutes. That was back in the 50's. How are you doing, Richard? Tom Carlson- Class of 45.

My dad worked at Armco for over 35 years. He worked in aneal/pickeling (sp.?). I remember him coming home with his clothes full of holes from the acid/ He called it his 'golf' shirt because it had at least 18 holes.I took the tour once and couldn't believe the conditions the men worked in.
I also fondly recall Armco Park out near Slippery Rock. We use to go swimming there on Fridays while parents played Bingo in a pavillion;the company picnics there; the beautiful woods fro walking; the quiet.
I am definitely an Armco girl. It did a lot for my family.

I am a Armco girl too. The Armco park was lovely. I remember going to the Penn Theater at Christmas time for a special Armco treat for their children--there was a show and stockings handed out. My mother had a set of stainless steel silverware with the Armco stamp given to my parents when they married.

Are the Reismeier brothers still there?

For Tom Carlson. Dear Tommy: I just today saw your blog and yes I am the Dick Palmer you knew on Miller Street. I remember running into you that day. I will be 80 my next birthday and I love having this blog to make my comments about our childhood. Hope you are well.

Charles, please forgive me for using the blog for personal reasons.

I remember trying to get a job there in the late 1980"s Today being retired military and living in Hawaii. I'm grateful that I never got a job there.

I recall working at the ARMCO on weekends while attending Pitt. They had a program for college kids to work summers and weekends to help defer college cost. It was a wonderful experience. It made me study harder as I knew I didn't want to spend my life in the mill like many of my relatives. Don't know if the the program exists with AKS?

My father worked there for 35 years and i have fond memories of armco park and and being part of the armco family. after my fathers premature death we thought my mother would be looked after pension wise. now these new owners have successfully cut the pension and any remaining health benefits.Nice way to treat someone in their 80's. and their stock has tripled in value recently, nice job ak steel

Can anyone add to the remarkable story of Townsend and Naugle at Butler's Armco Mill?

Working at Armco was a mixed blessing. It kept many of our young fathers alive because they didn't have to go to WWII. But steel mill work is hard on the body. Many of our fathers died in their 40's and 50's because of the stress. My father pushed college to avoid it.

Both of my grandfathers worked at Armco Steel. My paternal grandfather was written about in a book called, "A Walk on the Crust of Hell." His is a tragic story as he died when the step he was standing on broke as he was taking the temperature of the steel. He landed on the molten layer, and was rescued by a man who put himself at risk to carry my grandfather to safety. My grandfather succumbed to his burns/injuries 2 days later. I never got to meet him as this happened years before I was born. I think it was in the '60's. Did anyone know a Frank Simmer? My other grandfather was Edward Johnson.

My grampa retired early after a guy he worked with fell into the steel and died. Apparently he witnessed the accident and it was just too much for him. I'm not sure if it was Frank Simmer or not. I don't remember what year my grampa retired. If I had known that these sorts of accidents were going to be erased from historical archives I would have made a better effort to get him to talk about it.

Vic C said.. Lets not forget those women welders at Pullman and Armco., WWII. DOES ANYONE REMEMBER HOW DENSE AND HEAVEY CINDERLAG WAS?