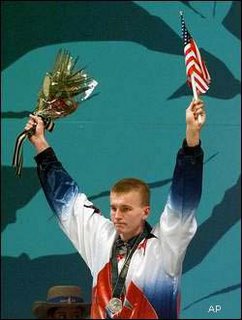 When Eric stepped up on the podium to receive his silver medals at the '92 and '96 Olympics everyone in Butler trembled with pride. Eric died in a car accident on his way to swim practice last Saturday. A colleague at the University of Michigan where Eric was a swim coach said: "Eric wasn't flashy, he was kind of a quiet guy, but with a deep, deep resolve. He had the heart of a champion, with all the things you think a great athlete should be. He was just the best."

That's how we feel about you Eric, and bow to you in recognition for your accomplishments.

Our condolences to Eric's wife and two children, Austin, 5, and Madison, 2 who live in Ann Arbor, Michigan and his parents who live here in Butler.
Posted by Charles at 11:24:00 AM

I went to Eric's funeral -- and my goodness, how we (even from afar) have morned. Jon U., Eric's U of M coach, was so warm and strong too. The memories, the lessons -- sigh -- it is hard to describe.

I've got a tribute of sorts brewing on my blog -- to be posted soon. He was put to his final rest on MLK Day. Fitting perhaps with many similar life-themes.

And, sadly, too many young people depart Western PA. They must. Some of my prayer was that we are strong at home to do here what is necessary to allow them to come home and soar as champions. We don't put our kids first in line as we should. Our priorities -- community wide -- should be about reaching our potential. Sadly, it is too often just about survival.

Eric is an inspiration.

I remember reading about Eric's feats at our Butler YMCA and was amazed about his talents back then.

It's been nearly two years since John McLaughlin died, but some of his biggest fans are making sure his legacy lives on. . .

They are raising money to place a statue of the Butler YMCA swim coach and aquatics director of 45 years in front of the Y on North Washington Street.

The life-size bronze statue will show Mr. McLaughlin, who was known as "Punch," with Eric Namesnik, a former student of Mr. McLaughlin's who went on to win Olympic silver medals in swimming in 1992 and 1996.

May 2006: There was an Eric Namesnik Memorial Grand Prix Swimming Meet held at Ann Arbor, Michigan.

A swim meet with Eric's name is going to be hosted this summer in the AMS LSC (Allegheny Mt. Swimming Local Swim Committee). See that site, http://www.amswim.org.

CORRECTION---the coach was known as "pump" he taught me and many how to swim.