Our Penn Theater is Back ! 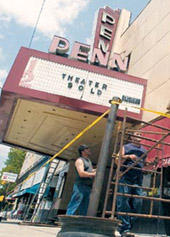 Sixty-seven years ago the Penn Theater on Main Street in Butler opened its doors, offering films to patrons of the thriving downtown business district. Now the new Penn Theater is seen as a catalyst to downtown's revitalization. The Butler Penn Theater Community Trust acquired the theater last year and began to return the structure to its original Art Deco splendor. Already numerous performances have taken place.
Posted by Charles at 10:34:00 AM

Friday and Saturday
September 16 and 17
8PM each evening:
The Penn Theater Community Trust presents the film Under the Tuscan Sun

The Penn Cinemas closed in May, 2001—ending the long reign of Main Street's last picture palace. The theater's owners were asking $195,000 for the aging building. The theater was owned by Theater Management, a Florida-based company that did not see downtown theaters as a current part of its business.

Despite a $250,000 renovation, the Penn had not turned enough profit to satisfy the company, which claimed that the theater had been for sale since work was completed on the renovation in 1997.

Interestingly, the company said the only reason the Penn had stayed open so long was beacuse it was a favorite of the founder of Theater Management, Chester DeMarsh, who bought the theater in 1965.
[from: cinematreasures.org]

This was a recent performance at the Penn Theater.
Click: Degenerate Measures Showcase

THE LYDIA THEATER PROJECT
Read An Open Letter from Don Rasely who is spearheading this project.

Boy, I sure saw a lot of pics at the old Penn theater. Saw a lo of Saturday afternoon cowboy "shoot em ups" at the Capitol across the stret. A lot of fond memories of the old Penn. The popcorn was prety good too.

I can remember when my Uncle worked at the Penn. He took myself and many of my cousins to the Penn during his off hours so that we could see the movies. I'm glad to see that it's becoming a part of Butler again.

The Penn Theater opened in 1938 with 1,100 seats and an early version of air conditioning that chilled air by blowing it across a pool of cool water.

I have many fond memories of the Penn Theater. Also of the Penn Grill across the street. Cherry cokes, etc. I even worked a couple nights as usher when they were showing Meet Me In Saint Louis with Judy Garland. I could almost recite the whole thing, I saw it so many times. There were 3 other theaters in Butler when I was a kid, the Butler, the Capitol and the Majestic. The latter was great for Saturday morning cowboy pictures and Flash Gordon, etc. Loved every minute of it.

Richard --- I think you are referring to Cummings's Candy Store across the street from the Penn Theater. I think it's still there.

The money will be used to help revitalize downtown Butler's historic district and to renovate a building that will serve as a Technology and Support Center for the Penn Theater.

Regarding my comment on the Penn Grill, it was really on the other side of the street but between Brady and Jefferson. It was near the old Capitol Theater. Shirley Temple's movies were great there. I do remember Cumming's and have commented on it in one of my other blogs.

I am so happy that the Penn is being revitalized! She was my first afternoon date, my first real job, and always my favorite place to see Epic pictures! When I went home to bury my mom, I was crushed to see it closed! Thanks to the people who didn't give up on her, she's a gem!
Heidi (Purvis) Staggs Virginia beach, VA

I suspect everyone is aware of the charges currently pending against Don Rasely. He had a lot of personal investment in this rehabilitation. I hope the project continues without him and that legal wrangling doesn't prevent its fruition.

What will become of the Penn Theater now that Rasely has pled guilty? I understand he is not supposed to be near children. Adults-only shows?

Well looks like Randa Clarks unflinching compassion for Donald Rasely has cost her her job.

I still live in Butler,Pa. and my brother Jack Albert worked there for a short time as a usher,Iremember when my oldest brother went to the service and all the family took him to the bus station on New Castle St. to catch a bus to Pittsburgh to what ended up him seving 20 years in the Air Force after he got on the bus we went to the Penn to watch King Kong and ate strawberry jelly and jumbo sandwhiches, this would of been in June 1965, my brother who now lives in California name is Clyde Edward Albert jr. and also have 2 other sisters and 3 brothers. Joyce Anne Albert now (Smith) anne_smith1956@yahoo.com would love to hear from old friends.

I remember all the theaters, but mostly the Butler Theater. It was elegant and beautiful. Just going upstairs to the restrooms, it was beautiful. There was a soda shop just down the street across from the hot dog shop, don't remember the name but spent a lot of time there. I graduated from Butler High in 1959 and remember how everything was then

Does anyone have any information on who now owns the theater or what is being done to revive it? I went on a tour for my theater class a couple of years ago and was so disappointed that the community could let such a beautiful place slip away.

I remember going to Saturday matinees when I was about 5 or 6 years old and the theater gave all the kids a toy. Does anyone know which theater did that?

In the late 50's the Penn and Butler were the only movie theaters in Butler still operating. I personally preferred the Butler but we saw lots of pics at the Penn. Glad to hear someone is refurbishing the place.

what happened to the 1/4 million in federal funding that was supposed to be used for restoration?