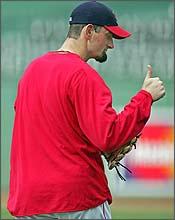 Matt Clement is Butler's contribution to the Boston Red Sox.
Matt's Major League Debut was in 1998.
We're gunning for you Matt. Keep that right hand delivering the stuff!
(Photo:Stuart Cahill)

Sept. 24, 2005
Boston's Clement aims to get back on winning track against Baltimore--
Boston righthander Matt Clement will attempt to halt a three-start losing streak this afternoon, when he takes the mound for the Red Sox against the Baltimore Orioles in the second of a three-game series at Camden Yards.

Clement is winless since September 3, including an ugly defeat to Oakland last Sunday. In the loss, Clement was knocked around pretty good, allowing eight hits and seven runs over 1 1/3 innings. The Butler, PA native walked one and didn't strike anyone out in the defeat. Over his last two starts, Clement has been touched for 14 hits and 13 runs through 7 1/3 innings. For the year, Clement is 5-2 with a 4.50 ERA in 14 road starts. [from: Sports Network]

i moved to boston over two years ago and the people in boston are die hard baseball fans. life actually stops while they are playing. i had a hard time adjusting to watching baseball every night it was on. but it became easier seeing Matt play. having been a year behind him in high school it was an honor to see him play. it would be great hearing from any butlerite that is in the boston area.

In July 2005 Matt Clement was felled by a vicious line drive off the bat of Carl Crawford in St. Petersburg, Fla. While recuperating he received an interesting letter from his old physics teacher at BHS.
View the letter Click to view the letter

The proposal to build an indoor/outdoor sports complex in the Highfield neighborhood remains active, said Daryl Patten, one of two township men developing the project.
Patten’s partner is Matt Clement, a former major league baseball pitcher and the current Butler High School varsity basketball coach. They want to build a multipurpose, multisport structure on the back 10 acres of the Highfield Community Center.
August 2012