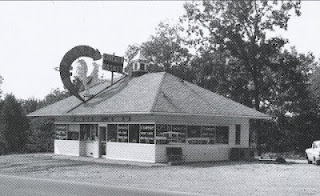 Email ThisBlogThis!Share to TwitterShare to FacebookShare to Pinterest
Labels: Around Butler, Restaurants, Route 8

I thought this place was called the "Terrace Inn".

Me too,but could be a different place but I don't remember a KFC in that location.
Bob Dorcy

It wasnt a KFC. KFC was located on washington and jefferson streets in Butler. This location was known for "chicken in a basket" Parts of it are still there.

I remember when "chicken and a biscuit" opened up next door - it was the beginning of the end for this place.

Where was this on route 8 South? I am guessing across from the current Diehl Dodge Auto.

The route 8 North location was discussed some months ago along with the reason for it closing.

It was located on right side of Route 8 North before you get to the stop light at Unionville. The parking lot area remains. We always called it "Chicken in a Casket"

The Route 8 North Terrace Chicken in a Basket was discussed extensively on this site on May 29,2010 (under the Restaurant tab).
The fact that Charles Cingolani mentioned one on Route 8 SOUTH makes me wonder where that one was.
Any thoughts ? I am stumped. Thanks in advance.

I thought the Terrace Inn on Route 8 South was where the car dealership right beyond Kelly's is...It was right next to the road; the dealership (can't recall the name) bought the property and tore it down as part of it's capital improvement of the property. I wish I could be more specific; call it an eighth of a mile south of the light at Rt. 8 and McCalmont Rd (between Kelly's and Baglier)--shows how long I've been away from Butler..the mind..it goes (street names), but I'm certain of the location of which I speak.

I know it was Keffalas that owned the Terrace,I went to school with Johnny in the 60's. I can't remember whether there was one or two of them. Seems to me one burned?

I had forgotten about the one on Route 8 south. The salesmen from Trostle Oldsmobile used to go there for lunch on occasion. It was torn down prior to the Dodge showroom being built.

Iheard the one on rt.8 north shut down because the brothers couldn't get along. I also remember stories of some other businesses they owned did burned down, mysteriously.

It was originally owned by Spiro
Kefallas and was on the Dodge lot
on Rt. 8 South. I grew up in that
area and it was nicknamed "the
Rooster Bar" by locals. Very nice
little place with good food and nice people to talk to. Used to
bounce from there to Mama Rosas
some nights. Great memories!

Back when the melt shop was being built, myself and many other construction workers lunched here..Food was good a we were treated well by Spiro

Sorry, there is a wrong notation connected with this photo. This is the restaurant on Rte 8 North. Spiro owned both of them. The negative/image is owned by the Butler County Historical Society as part of the original photographer's collection.

Long day. The photo is of the restaurant on Route 8 South, not north, sorry about that.