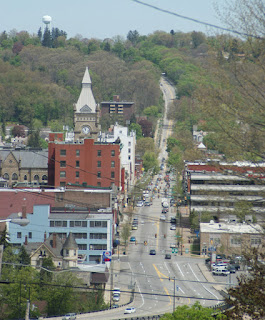 Email ThisBlogThis!Share to TwitterShare to FacebookShare to Pinterest
Labels: View of Butler

Thanks for this spectacular view!

It seems strange to see a curve in the viaduct. I wonder if the people still living in Butler like the way the project turned out?

North Main Street hill - the site of many races in the50's and 60's, starting at the light at Penn Street and ending at Bon Aire. Lots of speeding tickets issued too! All is quiet on 'The Hill' today.

The memory is there but the familiarity has slipped away. I'm getting like Charles, nostalgic in a way for a time that was. I relate to these pictures as a child growing up in Butler; when I've gone back (half dozen times over the last 20 years), the feeling wasn't there because the town of my youth essentially is gone. No, that's not right--the town is there but the child is gone. Tom Wolfe probably said it best...you can never go home again.

"The memory is there..." as Anon well said. So....what's new? The early settlers of the area would be nonplussed by the changes that occurred over the years as we are after the time of our youth has passed. The Butler of that time is no more except in memory. Talk about getting ''neuralgic" as well as arthritic.

The influx of HUD and the lack of pride in home ownership along with the vast social programs that are available in Butler have led to a steady decline in our city. The ants will always find the candy.

I was with my Dad when he went to pick up a new 64 Pontiac at Gil Morrow Pontiac. My mom needed a new car and Dad saw a little red Tempest 2 door and asked "Uncle" Gil about it. He said "Thats the new GTO,it'll top Main Street hill at 100 miles an hour,we ended up with a 4 door Falcon. Probably a good thing