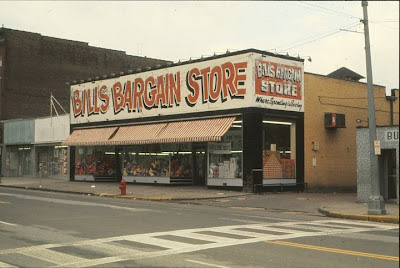 ...we called it Bill's Bargain Barn..notice the aqua blue tile on the Burger Hut. That's how I remember it, not the brick of today.

I remember the day after christmas sale when all the kids would line up to get toys at 50% off. It was a really neat event in a small town.

Does anyone know when this used to be the A&P store? I only knew of the one on the Island.

I remember the A& P in that location,early 50's. I used to go shopping there with my Dad and later down on the Island. That would ha 1953 or so.

Wasn't there an A& P in the Greater Butler Mart where Gaylords and Grants were?

I remember buying blackjack gum in a grocery store in the 40's at that location. Don't remember if it was A & P but think it must have been.

Wasn't there another A&P on South Main St. across from the present post office location? Both closed when the Island store was opened. I could be mistaken.

We appreciate the posting of all these old downtown store photos. Brings back a lot of great memories. Thanks!

Anyone have any old photos of Gaylords/Grants/Sun Drug on Route 8?

I believe there was a grocery store - not sure if it was and A&P - on Cunningham St. where the tier parking garage is currently located.

There was a Sparkle Supermarket right beside the old bus terminal. Does anyone have a picture of it?

Also, there used to be a supermarket on Pillow St. (just past the intersection with Cunningham St.) right across from the apartment building. Anyone remember what kind of grocery store that was?

The supermarket off Pillow ST I believe was Klugh's. I remember the rotisserie chicken machine they had in the window. My bus would be stopped at the light th and I would watch the chicken turning. Great memory.

Klugh's was on Cunningham St. The store I am referring to was on Pillow St.

The Kroger Super Market was across from the apartments on Pillow St. I watched it being built. Many a days my buddies and I played in the woods behind it. If we saw a Roy Rogers western we played cows boys and indians. If we saw a John Wayne WW II film we played Army.

We used to call it "Silly Willie's!"

I remember that "Bill's Bargain Barn" must have had 3 or 4 different "Going out of Business" sales before they finally closed down - I think he made enough money off the big sales to keep it open a while longer!

They always had good duck (or is it duct) tape.

I used to work there. My boss was Mr. Green. Was only there a short time, then went to another Butler landmark Woolworth's to work.

You are misttakin, Natili's is across from the post office on south main, & its been their since the 40's or 50's

Wow thank you for posting this old picture, this is my husband business store long time ago, but that time I'm not part of his life, now he is retired from all of his business. Thank you Blogger from Butler.